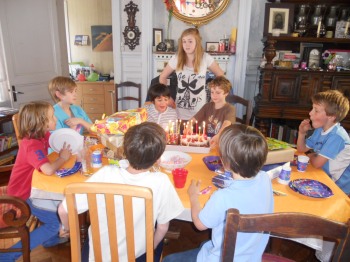 May and June have been months full of pleasure. The children have racked up vast numbers of invitations, and given out their own; whilst as the summer term draws to a close, the school Kermesse is imminent.

I don’t think a weekend or wednesday has passed without a party, and I have been so genuinely pleased by the parties on offer. Somewhere along the line, children’s parties have been elevated into high cost/high glitz extravaganza’s with an ever exhorbitant menu, entertainment and the requisite party bags. Parents, having forked out for excesses of presents face ruin having paid the bill for the party. The french, fortunately have a different view!

Our first invitation of the year came from a boy living in the countryside on the outskirts of Rouen. Fortunate to have a large garden, the invitees were turfed out into the fresh-air, to roam and run wild in the undergrowth, kick about a football with their friends,  with the primary source of long-suffering entertainment being the birthday-boy’s dad; whilst his mother brought a large home-made cake out onto the garden table and some big jugs of drinks to refresh them when they started to flag. There was no “end-time” for the party, and as the parents started to return to collect their, by now, filthy children, chairs were drawn up and a glasses of wine handed out. I got up to leave once I started receiving texts from the mother, whose child I was bringing home, questioning whether I was lost. Inevitably, that evening my children slept well.

Since then, the parties have followed a recurring theme – less is more. One mother took 15 boys to the nearby forest and let them loose. Dens made of sticks and branches were constructed, the boys got covered in debris in the process, and stopped play for a seriously large slice of cake, and returned home an hour after they were expected!

My son decided he wanted nothing better than to share his party with his best friend and their closest friends. His mother had the garden, and I made the cake. We hid “sweetie parcels” in the trees for a treasure hunt – and at the end the water pistols (with a seriously large trajectory) came into action. Another set of tired, dirty but happy boys!

Its really refreshing to fight the flow of excess, with good old “back to basics” hospitality. Is it the same France over, I don’t know but I certainly hope so.

This weekend we have the Kermesse – but thats another story!