I talked about moving house before – but last time, when it was my move, I lost the camera under piles of paper and boxes. Today the occupant of the 2nd floor is moving out, so at the crack of dawn I was woken to men’s voices in the courtyard below and the setting up of the ‘monte meuble’.

It is an ingenious device, but forgive my ignorance, because I have never come across one of these outside France. perhaps they exist elsewhere – let me know! I can’t believe the British or Americans would agree to these being used, especially in the times of ‘Risk Assessments’, ‘Health and Safety’ – all that litigation when something falls off and injures someone. The mind boggles. And that is exactly the point. Things do fall off….. 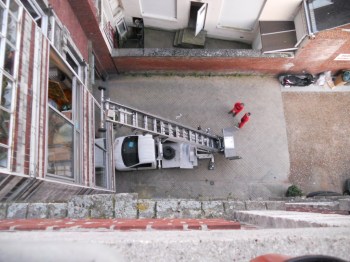 Unlike my move where the demenageurs had the good sense to strap the ‘ladder’ of the monte meuble to the window. This one is floating free at the top, barely resting against the window frame.

Like my demenageurs, these guys also don’t strap any of the furniture onto the platform. When my friend Carole moved  from her apartment, one of her wardrobes fell from the platform at a significant height above the ground and smashed into ‘firewood’ on the pavement below. “Explosé”  as she put it! 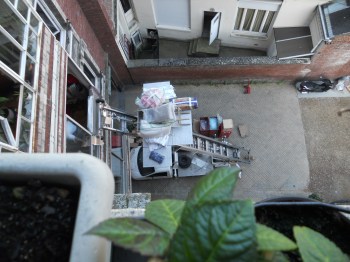 Well that lot isn’t tied on! 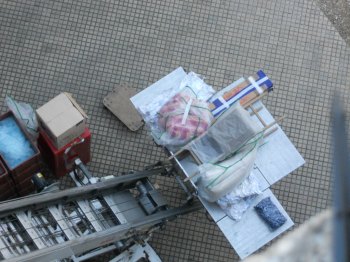 But I am relieved they took the cylindrical packaged chair (lying sideways) off, before they sent it down!

I can’t watch any more – too stressful.

Did I mention the thoroughfare to a busy kids nursery is half a metre to the side of the ‘monte meuble’ – hmmm!