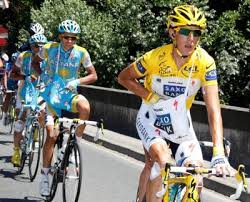 On the way to work this morning there were groups of fit looking cyclists on many road junctions, gathering  to set off for some daily training. Let’s not mix words, these guys were looking seriously fit.

Rouen is pretty good for hills, many of the major arterial routes and smaller side roads take a serious climb up out of the Seine valley to the plateaux beyond – and I should know, since I regularly join a group of french mamans for a circuit of the Forêt Verte, north of Rouen and being the most (city) centrally located maman of the group, I have the furthest  and therefore longest and hardest climb. I have been known to take my bike in the car to miss out the steep city centre roads since there are plenty more hills once we reach the forest – and the french maman’s are correct in their assertion that I miss out on the downhill race at the end of our sortie when I do so – but sometime’s being an exhausted heap of sweat with legs like jelly is not the ideal starting point for meeting the french maman’s who are looking chic and cool at our rendez-vous to begin the ‘pretty bit’ of the cycle ride.

I am therefore in awe of these fit men, though I do sometimes stop to wonder quite how they happen not to be in the office at 9am on a weekday morning. I wonder if there is special dispensation for cycle leave – Congé de Velo, as we are of course approaching the sporting phenomenon – equal of course to Wimbledon in national importance – The Tour de France. 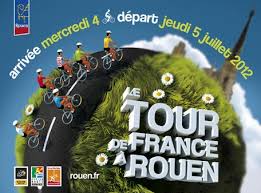 This year I am very excited, having lost out on the purchase of a house on the Tour de France route in the Pyrenees some years ago, because the Tour de France is coming right past my door (or within a couple of hundred metres of it anyway!)

The Tour de France passes through Rouen twice,  on two consecutive days, and I shall be there to watch not just one fit looking cyclist but hundreds of extreme atheletes thundering past, even if the whole process takes mere minutes, at least I can get a second ‘take’ the following day.

The last time the ‘Tour’ came through Rouen was in 1997. This is the 99th Tour and approximately 500 000 spectators are expected to be lining the two routes.

The first route on the 4th July runs between Abbeville in the North and Rouen and covers 214km. The cyclists will run a coastal route which passes Eu, Dieppe, St Valery en Caux and Fecamp before descending into the Seine valley.

The second route on the 5th July runs from Rouen to St Quentin in L’Ainse and covers 197km and will follow the Boucles de la Seine (the twists of the Seine).

The arrival point on the 4th July will be at Quay Jean Moulin where a giant screen will be erected so that the spectators will ‘ne pas perdre une miette de ce grand moment sportif’, or otherwise said…not miss a crumb of this great event! The arrival of the ‘caravan’ will be approxiamtely 15.54 with the hind- runners arriving about 17.11.

On the 5th July, the depart of the ‘caravan’ will be 10.45 with the runners leaving about 12.30. A full itinerary of times of ‘passage’ throughout Normandie can be found on http://www.seine-maritime-tourisme.com or in the June 2012 (No 178) Seine maritime Magazine.

To coincide with this great sporting moment two of the great Armada ships are mooring on the Seine quayside at Rouen, and will give us a little glimpse of next years great event – The 2013 Armada Celebration at Rouen where the Seine will be bulging at the seams with Armada tall ships. 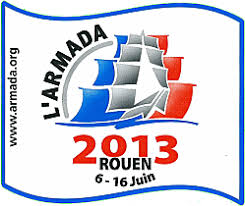 But for those like me who, if on a bike, would have lost sight of the Tour de France stragglers after a mere nanosecond, the opportunity to take a spin on the hallowed cycling ‘turf’  has been made possible by the Department Haute Normandie. ‘A Chacun son Tour’ (To everyone his turn) is an offer to amateur cyclists to cycle some or all of the route, Eu to Rouen, on sunday 1st July. 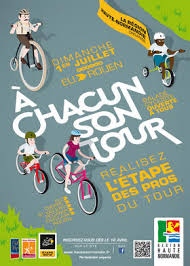 If even that seems too daunting there are always the electric velos for hire, parked at various points about the city!

Sadly the only ‘Maillot Jaune’ that we will be likely to wear will be the ones we found lurking in the bottom of the drawer earlier the same morning ! 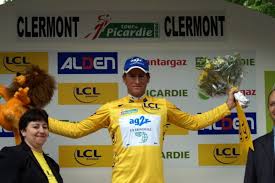