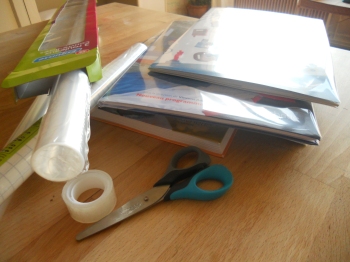 Can you see the lovely sheen!

One of the French national obsessions, along with stuffing entire bars of Milka chocolate bars into chunks of baguette in an attempt to give schoolchildren a quasi-healthy after school snack, and having very small dogs (in handbag optional),  is to send schoolchildren home on the first day of term with at least 15 text books apiece to be covered with clear plastic film. The obsession necessitates that French mothers always buy their children a new school bag each for the rentrée, and at great expense, to carry the mountain of books back with since the ropey old one from last year will undoubtedly collapse under the load!

Even a very good glass (or two) of chilled white wine is not enough to relieve the tedium of this job, nor will the addition of Edith Piaf, Serge Gainsbourg or Camilia Jordana reassure the failing spirit that the pedestal on which we have put “all things French” has not got a wobbly leg.

It is not enough that the text books are covered, but at the rentrée French supermarkets also abound with shiny coloured plastic sheaves in which to place and protect exercise books- the so called ‘Protège Cahier’. Woe betide anyone who has left their shopping too late and finds the much needed yellow ‘protège cahiers’ have run out – because no other colour will do!

I have in the past attempted to cheat. One year I tried to claim that the Cellophane cover from last year (which to be fair did have a couple of compass stab marks) was my own. It wasn’t really in such bad condition at all and the thought of ripping off the older cover to replace it for newer identical cover was too much! It was returned the next day for recovering by an unimpressed ‘maitresse’.

Another year I bought sticky-back plastic covering. This stuff is notoriously impossible to use but looks great once mastered. It took a while to ensure that I hadn’t trapped half the atmosphere in the form of annoying little air bubbles as I stuck it to the book in question. At the end of a VERY long evening I had been very satisfied by the pile of immaculate, and may I say perfectly finished books at my side.

This time the ‘maitresse’ sent the entire pile home again because they were SO perfectly done that she hadn’t been able to tell they had been done at all. After a week or so of ‘backward’ and ‘forwarding’ of my perfectly covered books for re-covering my, by this point very anxious and faintly hysterical child, begged me to back down.

Through gritted teeth they were recovered- again; unsticky clear film ceremoniously wrapped over the earlier adhesive film…. but not without one or two compass jab marks thrown in for good measure.

I’m just off to refill my glass!