For some years I’ve had a little soft spot for the word ‘bulot’. It’s come about after a little incident with the word two years ago when I decided to ‘demission’ from my first job in France.

I can assure you that, as kind as my French  spell check has been today the ‘arrêter’ did not have a cap on the ‘e’ in the original letter, nor did ‘boulot’ mean job!

For those of you who cannot read French, what I inadvertantly wrote was..

‘Monsieur, I want to finish my snail at the end of the month’.

The letter is quite possibly still on the wall of the directors office to this day, exactly where he pinned it two years ago, having gathered the rest of his staff to watch the event in a state of hysteria.

Two years on, I am as keen to find my way in the French job market as I was then, and so I have invented this new word, ‘bulotomist’ in honour of the ‘linguistically challenged seeker in search of the perfect job’.

Just before christmas, on my way back from the Ecole de Beaux Arts, where I am now studying to become Monet II, I spotted a glut of American tourists; and where there were tourists, there were guides. It occurred to me that one thing that I did have going my way was fluency in English and knowledge of the city, and this was surely a ‘sure thing’ where such employment was concerned.

After all, when one is obsessed by architecture, fine art and patisserie, is there such a thing as having a finger in too many pies? Not letting the sun set on a good idea, I dropped off my CV at the Bureau de Tourisme with all the panache of a serial bulotomist.

During my ski adventure in Switzerland I received word that i’d been accepted onto the ‘Formation de Guide Accompagnateur’, and today I arrived at the venue to be formed ,reformed or transformed, depending upon how one likes to look at it! To add to the authentic French atmosphere, a street musician serenaded my arrival with his accordian. 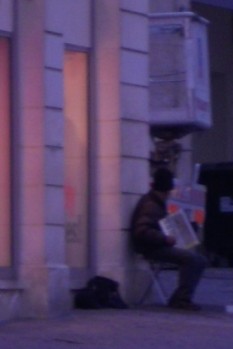 This morning’s lecture was two hours on the History of France with special reference to Rouen. A title worthy of  ‘Mastermind’.  My pride in my quasi-bilingualism was quickly devastated by my new found colleagues introductions. They were for the most part trilingual French and Spanish, a potential quadlingual Japanese, along side which my skills looked somewhat pathetic; there were unformed guides and several preformed guides from other regions… but only one architect. Ha!  The thought of glamourising my attributes in ropey French having heard the introductions of my counterparts set my heart racing. Thankfully, the effort of concentrating on the French wiped away all traces of nerves and if there is one thing I have learnt since living here is not to take myself too seriously. I delivered the potted me!

In four months this little oral introduction will have been transformed into a 15 minute oral exam on an aspect of the history of Rouen or its monuments, a suprise topic selected by the tutors.

‘If you pass the French oral, you get to do it in your native language’. they said.

And that’s where the fun begins!

For now we have an intensive study period from Charlemagne, and the Vikings, to Colombage, and the Renaissance. In June the Armada tall ships arrive to dock in Rouen bringing with them thousands of tourists, in July and August the Japanese arrive in their groups requiring city tours and accompanied exclusive shopping, and the summer sees a return of ‘The City of Impressionism’ and the celebration of Monet and his ‘friends’.

If all goes well, I’ll be in the thick of it…

…if not, it’ll be ‘escargots’ for me till next time!