Last weekend, just before ‘husband à l’etranger’ set off again for Nigeria, we walked into town to try to pick up a fridge magnet for one of his colleagues. Slightly bizarre, you may think, but actually, his colleague bought a fridge magnet for every place he’d visited with his wife when on motorbike – only in Rouen he’d failed to get hold of one. I knew that the Musée de Beaux Arts had some really lovely ones of Impressionist views of Rouen and so it seemed a good opportunity for a sunday morning walk.

The only problem was that this particular sunday, Rouen seemed to be a little more difficult to get around than usual. There was security fencing on all the vital corners that we wanted to pass by, and police presence was heavy, especially near the art gallery. Eventually, we took a seat at a café in the sunshine, and watched the activity around us. It wasn’t long before a couple of limos passed by withdarkened glass and motorbike  outriders. François Hollande, the president was in town. 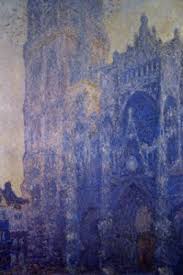 This summer Rouen celebrates it’s strong link with the Impressionists with the  ‘Festival Normandie Impressioniste’, This is the second time this event has taken place, the first being in 2010. Hollande had come for the official opening of the Exhibition. Most people probably recognise the famous series of 33 paintings of Rouen cathedral by Monet, but what many don’t know is that the art collector and patron of many of the struggling impressionists, François Depeaux had at one time in his collection 600 of their works of art, including at least one of the cethedral series. A messy divorce forced him to try to offload the paintings, and in 1903 he offered them all to the Musée de Beaux Arts at Rouen. The board of governors at the musée refused them all thanks to their ‘avant guard’ status, and by the time they finally changed their mind in 1909, the collection had dwindled to a mere 60. Nevertheless the Musée has a superb Impressionist wing, and to celebrate the Impressionist Festival, is exhibiting another 100 from private collections from around the world. The theme this year is Eblouissant Reflets (dazzling refelctions) celebrating the Impressionists love of painting the movement and reflective quality of the water – particularly on the Seine and the Normandy coast. The exhibition runs from now until 29th September, along with several other large exhibitions in Normandy, and the wonderful Son et Lumiere (sound and light) show on the cathedral facade after dusk.

Whilst we were sitting in the café, we picked up the local paper and were amused to see that ‘les effectifs des guides conferenciers ont été augmentés. Ils passent de 42 à 47 pour prendre en charge le flot de touristes.’ (The numbers of Conference Guides have been augmented from 42 to 47 to take charge of the flow of tourists) I, and my new colleagues had made it into the news! Rouen by all accounts was set to be busy this summer!

In the week preceeding ‘husband à l’etranger’s return, with a mere week left until my final exam for Guide, the arrival of a close friend from England allowed me to suggest a last bit of Impressionist revision. A visit to the home of Monet at Giverny, only 30 minutes by train from Rouen. Arrivals at the station at Vernon, the nearest station to Giverny have the choice of shuttle-bus or taxi to run the final 5 kilometers. Luckily my friend and I think alike, and although an overcast day, delighted in the idea of a bike ride from the station along a disused railway track to the home of Monet. (Bikes can be hired from the café next to the station). The sun blazed as we headed out along the Seine valley and on arrival we avoided queues for entry thanks to pre-booked online tickets.

The unseasonably long winter had kept in check the spring flowers, but it was still pretty, and the house was lovely, mostly for its modest and familial proportions. Monet was passionate about his garden, and though I am not a great lover of crowds, I must admit that I really want to go back to see it in its summer prime.

Just as we left the Japanese garden, the first drops of rain began to fall, and by the time we had hopped back onto our bikes in search of our favorite of the  handful of cafés, the heavens opened, and we flopped into the seats at our table bedraggled. My friend wasted no time in ‘selling’ my guiding ‘talents’ to a neighbouring American couple!

We were charmed by our hilarious waiter who offered us Psssscht (pronounced sheet)(an alternative lemonade to 7up) to quench our thirst. When we could barely contain our laughter, he looked a little concerned, and asked what he’d said.

When we explained that it sounded a little rude, he mumbled

to which we replied

‘exactly’, and promptly fell about again!

We countered the continuing rain to visit the other art gallery, the Musée des Impressionists in Giverny, and visited the exhibition of  Signac, before climbing back onto our bikes, and back into warm sunshine for our return journey home.

But for now on the agenda, is my own visit to the Musée de Beaux Arts to see the visiting works of Art in the ‘Eblouissant Reflets’ exhibition, before I start presenting, amongst other things, the permanent Impressionist gallery to the summer visitors.

The Son et Lumiere at the cathedral is worth every minute of the late-ish night required, the scaffolding for the restoration of the cathedral facade being removed just in time to allow the Impressionist images to be projected onto it. Perhaps i’ll see you there?

4 thoughts on “The Impressionists, Monet and Giverny”