Today was the day of the Kermesse, otherwise known as the school fête. A day filled with bonhomie, bonbons and “ah bon?” (what really?)

The day started early, and at approximately ten this morning – my ‘otherwise-asleep’ adolescent was clamouring for his croissants in order to meet up with his friends in the school ‘cour’ (playground). They had a basketball stand to manage!

The school has devised a pretty neat system for paying for activities and refreshments, a large ‘welcome’ tent manned by parents selling booklets of ten tickets for ten euros, and thereafter a money-free day for children and parents alike. A second row of parents selling ‘ticket repas’with a choice of two possible menus, budget and gastronomique!

Today as I headed into the crowd to find my children with their meal tickets, It did occur to me that I might be being a little over ambitious – After being confronted by the following stalls, it was pretty self-evident that by lunchtime they wouldn’t be hungry! 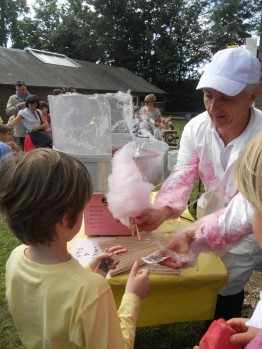 No really, there aren’t enough to chose from….

Did I mention how French parents are natural crèpe makers! No shortage of parent helpers for this stall! No lemon and sugar for the French, but a huge bowl of molten chocolate to spread over…liberally!

Under the trees thirty long tables are set out to await the parents, Maman qui ne mange pas entre les repas – French maman who doesn’t eat between meals – et papa qui a grand faim – And French papa who is a gastronome! And me, well because the menu gastronomique  has been cooked by a French chef and it’s good.

A midi, the parents discard their children and seat in huge gregarious groups n’importe ou (no-one minds where), the length of the tables, pulling in extra chairs for stragglers, serving friends, husband, wife, mamie (granny)or papie (grandpa) glasses of wine or sparkling water in gobelets (plastic cups – it sounds better in French doesn’t it!) whilst tucking into the menu budget, or gastronomique.

Frites merguez for the impoverished, (chips and spicy sausages)

Finally, a good hour and a half later, the parents rise, replete with bonhomie, a year’s worth of conversation and a contented stomach to search out their wandering children. Let the afternoon begin!

Monsieur ‘La chasse’ is once more on the scene. The hunt, an essential part of the French lifestyle is introduced early, and a necessary feature of the school fête, even though one wonders about the presence of authentic air rifles and lead pellets passing any sort of ‘health and safety’ guidelines.

I had already noted the stripey ‘Police – Do Not Cross This Line’ tape surrounding the sweet stand – curiously absent here!

The space men sing us a little ditty. The performances last all afternoon and parents come and go to watch their ‘petite pousse‘ (little ‘growing thing) do his bit!

Enfin, the tombola; first prize, dinner and a night for two at the 5 star Renaissance Hotel Bourgtheroulde in Rouen (complete with spa and underground swimming-pool). It is of no great suprise that I don’t win!

A last throw of the basket ball…

and we head home happy, our pockets full of silly 1€ plastic toys that will probably only just survive till the morning!

7 thoughts on “The Kermesse, The French School Fête.”