Somedays, (well actually normally at 3am when I wake in a cold sweat stressing about the impending tour on my calendar) I wonder who on earth set me up for this Tour Guiding malarkey! In the glow of the early dawn, the minutes ticking down to my second ever tour were gathering speed, whilst I lay in bed unable to mentally talk my way through, or indeed remember any detail about one of the principle monuments of the city! With the lightening of the sky came the terrifying realisation that I had only myself to blame for the terror I was inflicting on myself. Why oh why had I signed myself up for a career that involves public speaking in front of 30 strong crowds when I was the kid in class that skulked in the back of the classroom hoping not to be asked the question. For the first two tours I had the overwhelming urge to flee, much as had done the French soldiers on the fortified Pont de l’Arche on te Seine when faced with a fleet of ships containing 1200 marauding Vikings. 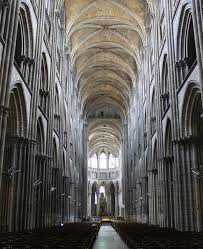 Suprisingly, the tours actually went quite well, and though my brain fumbled occasionally on the odd date whist trying to recall them at speed, the general ambiance of the group seemed to erase the fear after the first  ten minutes or so. The few minutes needed to walk from one monument to the next was enough to mentally recompose and  prepare the brain for how to present the next historical story and describe the architecture. Sometimes this was knocked a little off kilter by a ‘out of the box’ question from the group, but generally things had begun to fall into place.

Nothing could have prepared me for last Monday, when just as my general confidence and nonchalance was building, I turned to face the cathedral, and realised, in a moment of utter horror that the most important word in the architectural arsenal had ‘hopped it’, fled, ‘disparued’, leaving me with a vocabulary void in its place.

The first three monuments in the tour of Rouen are Gothic, and Gothic had gone awol. It wasn’t just that having learnt the whole tour at the outset in the French language, I had lost its translation – oh no! Gothic and Gothique are very much the same word. Quite simply, I had fallen victim to a very unwelcome verbal dyslexia.

The tour continued, as it should, and since my brain was no longer capable of annotating the windows, archways or delicate stone tracery with their historical references of primitive gothic or gothic rayonnant and gothic flamboyant, the lucky tourists were assailed with a veritable overload of dates as I struggled to get the details across. Fear was once more edging in around the edges as I wondered what other catastrophes my brain may have in wait for me. Whether the tourists noticed, I will never know.

Look at all those wonderful………..details!

But one thing is for certain, terror may indeed be preferable to nonchalance. Whilst fear may leave you expectant of memory loss, that loss creeps up unannounced to the nonchalant, a devastating blow for the unwary. And what worst place than mid performance with no prompt in the wings. As I went to bed that night, those dates were firmly engraved in my brain and my dreams were peppered with pinacles and gargoyles with imaginary labels, 1147, 1245 and 1477.  But the biggest label of all, in bright red letters, the word

Far too late of course…

but let’s hope it stays there until next time!

5 thoughts on “The Day I Lost Gothic.”