A great friend of mine asked, at the begining of the summer how I would feel about house-sitting her mini chateau in return for caring for her elderly and ailing dog. After a year in a appartment, albeit a lovely one, the lure of a garden, a tennis court and an orchard was extremely appealing. No suprises that  I said yes. 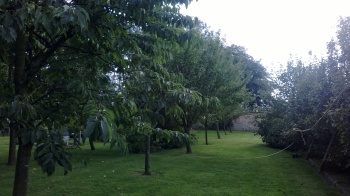 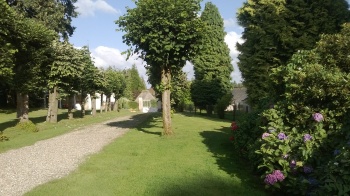 Thus began days of endless summer in wonderful Normandy surroundings, a bit of tuning of basic tennis skills and visits to the orchard to harvest the fruit to make jam, and find unripe pears as doggy-treats for a pear-loving dog!

The beauty of the chateau was that it is close enough to Rouen to continue working, and so it was that I could honour all my tour dates and guide an endless stream of Japanese and American tourists through the historic streets of Rouen.

One of the basic issues with guiding is what to do with personal effects. More often than not, the tour group arrive in Rouen by boat, down on the quayside. While those tours are always aided by microphone, the general indignity is having to carry a brightly coloured lollipop with the ship’s name blazoned across it in order not to loose the odd tourist along the way. On inclement days, the necessity to hold an umbrella claims the other free hand, leaving none with which to point to aspects of historic or aesthetic value. It’s not suprising then that I choose to descend to the ‘rendez-vous’ with nothing in my hands.

Leaving from the chateau early one morning on a hot sunny day it occurred to me that I had rather less pockets than usual. With my keys stuffed in one pocket, there was barely room for a hanky in the other. I deliberated a few moments on the need for a hanky on such a warm day, but having a sniffy nose and presenting a monument in front of thirty or so people are not good bedfellows. The hanky stayed.

The Parvis in front of the cathedral and the Bureau de Tourism has a lovely shady seating area under two rows of plane trees. Taking advantage of the peace and quiet of the  early hours of this sunday morning I took a seat to wait and to savour the beautiful morning before the arrival of the group when suddenly – quite without warning..

…a bird pooped on my head!

After the initial horror, I felt up to the hairline of my forehead to feel copious quantities of slime slowly oozing their way onto my face. The next few minutes were a hasty attempt to restore my appearance and calm without mirror, and with only one solitary paper tissue to hand. The doors of the Bureau de Tourisme remained resolutely shut at this hour of a sunday morning!

It’s three weeks later now, the school year has begun, and once more the city plays host to the late summer arrival of a multitude of American and Australian tourists. Looking at the sky this morning, I deliberated on leaving my umbrella behind. After a weekend of 30° weather it seemed unneccessary that it encumber my day. At the last minute I swung it onto my arm and set out.

No more than three seconds into welcoming my group from their tour host and about one nano-second before I invited the crowd to move across the Parvis into the centre of the square, there came a shriek from one of the ladies at the back. If I thought I had been inundated with bird poop three weeks earlier, it was nothing on this poor woman. The rogue bird had managed to cover her hair, face and an extensive portion of her blouse. The tour ground to a complete standstill and the shocked victim was rushed off to the Bureau de Tourisme to repair the damage. Thankfully it was monday, and the Bureau was open, a significant improvement on my experience. Five minutes later she rejoined us in good spirits ready to get going.

It was less than five minutes later, from an apparently clear sky that I felt the first spots of rain. The speed with which the clouds followed, and the skies darkened beggered belief, but only moments later the heavens opened to torrents of rain. Three quarters of the group were umbrella-less, but generally good-humoured and optimistic that it would be shortlived.

By the Eglise St Maclou, in all its fine new stone-cleaned whiteness, the drips were dripping down the necks of the unprotected crowd, and we hastily pressed ourselves under a small roof overhang to keep out of the worst of it.

By the Aitre St Maclou, the tour groups had bunched up, all trying in vain to shelter under the archway access point. It was a devil of a job not to loose Americans to the German group, and welcome some Russians to ours as we started to disentangle and move on to our respective destinations. One lone couple of elderly Canadians had completely lost sight of their group – and may even now still be wandering the rainy streets!

By the Passage des Chanoines, with clothes now drenched to the skin, the more miserable of the un-umbrella’d group pleaded with me to take them back to their bus.

“Unfortunately” I said, “the very nature of inner city parking in Rouen is such that where you were dropped off is not where you will be picked up – we will, unfortunately have to make our way to the meeting point at the other end of the city”

As you can imagine, the sense of humour, so abundent at the start was rapidly begining to diminish from a small quantity of the group.

We made our way, ducking and dodging between short arcades, doorways and cafe canopés to the Vieux Marché and the site of Joan of Arc’s death from burning at the stake. To add insult to indignity, an open overhead spigot-gutter shot a spout of water over the  more unwary, until finally the sight of the tour operator came into view, hair wet and plastered to his head, and we headed off to the bus. One woman stepped into a huge puddle on the kerbside, but didn’t appear to notice, the rest, forewarned by me of it’s existance hardly seemed to care.. they were wet enough already.

Once home I looked down at my jeans, sodden to the knee, and mused that if any advice could be given to any tourist, or tour guide (for that matter) about to embark on a guided tour – it is this…

Don’t forget an umbrella regardless of the forcast ..

and for heavens sake, …more than one tissue!

5 thoughts on “And A Bird Pooped On My Head!”