Yesterday ‘Husband à l’Etranger’ and I went to the Rouen Puces together for the first time since living in France. The Rouen Puces are advertised as ‘the most beautiful indoor brocante in France’ and for a nominal entry fee it is a wonderful way to pass a day wandering amongst beautiful antiques and bric-a-brac.

There are five halls to wander through, brocanteurs packed together, sometimes with tables loaded with lamps, or bibelots (ornaments) and othertimes with complete room-sets of beautiful French antique furniture, lamps and paintings on the walls. ‘Husband à l’Etranger and I were in heaven!

This year we were both on a bit of a mission. Having stayed in the chateau a few weeks earlier and having some beautiful ornate plasterwork ceilings in our apartment, we were on the lookout for a chandelier, or at very least a pair of Girondoles (table top chandeliers). Having passed a good three hours ‘flaning’ the halls,(a word specific to strolling through brocantes) as every good ‘flaneur’ should, it began to dawn on us that we were getting hungry!

The Rouen Puces have made over one hall to an impromptu restaurant. However, in true French style, this was not any old basic restaurant! At a guess the hall could seat a couple of hundred diners, and the ‘menu du jour’ was written out on huge blackboards, the tables were surrounded by ornamental urns and pillars each topped with an enormous fern, whilst here and there large cream-coloured outdoor canvas umbrellas helped us believe we were in the garden of a luxurious ‘Cote d’Azur’ hotel.

A small queue of a ‘dizaine’ were waiting patiently for a table, and the Maitre D was calmly shepherding people to vacant tables. Behind a couple of ‘femmes gourmandes’ we were also waiting our turn. Finally the Maitre D approached and said he had a table for four, and if we were happy to share with the ‘femmes gourmandes’ we could eat immediately.  No guessing that we readily agreed!

The ‘femmes gourmandes’ took the aisle seats, whilst we wriggled ourselves through the narrower gap between tables. Respectfully pulling our seats towards the edge of the table to allow the two women their conversational privacy, as much as one can when sharing a small square table, the ‘femme’ next to me grabbed the side of my seat to yank me closer saying..

‘Husband à l’etranger leaned conspiratorially across the table to whisper…

..and a second later, at the table the other side of us, the waiter approached with a steaming blue enamel pot. ‘Husband à l’Etranger’ grimaced at the idea of the skull lurking within, and I leant over to ask them if there was really an entire ‘cerveau’ (brain) inside. The couple and the ‘femmes gourmandes’ roared with laughter and lifted the lid to reveal a fairly innocent looking stew of somewhat floppy meat and vegetables and declared it was delicious.

Moments later a blue enamel pot arrived at our table and the femmes gourmandes rubbed their hands in anticipation and lifted the lid; and just at that moment ‘Husband à l’Etranger’ let out a loud…

Tête de veau will never be the same again for any of us! 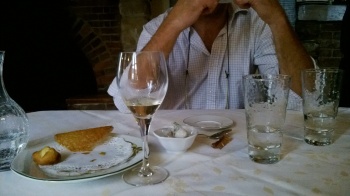 Clearly, the small ‘pichets’ of wine supplied at our meals were subsidized by the stall holders. Our innocent little pitcher contained a deceptive quantity of wine. We were rather more cavalier after the meal than before and it wasn’t long before we were once more standing in front of the chandeliers and girondolles. Some hard bartering and walking away a few times secured a good price for the pair and we left the Puces happy with our purchases, and having thoroughly enjoyed our day.