Returning home at 6 this evening, my arms laden with bags and bouquets of flowers I stop dead in my hallway, quite simply because I can go no further. There are two men, a huge cardboard box and a fridge blocking the way!

I am somewhat incredulous regarding the arrival of these two men, especially because they actually are in possession of a fridge. They were due on the 13th July but were clearly working on French time!

It is especially appropriate that they should arrive today, since tonight I am out to dinner, hence the flowers, and the two events dovetail nicely to demonstrate that elusive paradox known as “French Time”.

You may have read my previous post about our somewhat “désagréable”  proprietaire and landlord of the building in which I live. After a series of pitiful pleas to have the broken-down cooker replaced, and in the face of complete refusal by the same, I resorted to “storm tactics” in which I gained proof that every one of the miserable fitted electric fixtures in my kitchen were well past their ‘sell-by date’ and in a state of total “vetuste”. Eventually the campaign reaped results, and whilst in Italy on holiday in the early summer I received email confirmation that a new fridge was on its way.

I think I can be excused my growing paranoïa when July turned to August, August to September, and September to October, and now November, that the landlord had commenced a counter-offensive. I cannot count the number of emails that winged their way to the Agent, nor the number of phone-calls made to the kitchen fitter, only say that with the increase in time, the vocabulary, content and assertiveness of my communications improved dramatically!

My two sets of neighbours living below me have both chosen this month to move out, both equally frustrated by the landlord, and yesterday quite by chance I happened to bump into the Agent in the lift with two prospective tenants. It was a brave move on her part to ask whether ‘par chance’ I had heard from the fridge man.

Clearly with me and potential tenants likely to meet over the next few weeks, the agent made the all important phone-call, and the fridge is now with me, the very next day! It is mid November.

This kind of scenario is one that every Britain thinking of France believes is the norm. The French are quite simply always late, the workmen invariably delayed and everyone takes three hours for lunch. But is that really the case? The answer simply is that that depends!

Yes the agent had quite clearly taken a three hour lunch with plenty of wine when we first signed for this apartement, which could explain why the “apartement with garage” that we’d signed for didn’t actually come with a garage. But no, not all business men and professionals are the same. French professionals often work longer hours and more intensively than their British counterparts, but take longer fixed holidays than the British and generally for the entire month of August. For this reason I would have been foolhardy to think that a fridge ordered in July would ever have been delivered or installed before September.  It appears however, that French workmen do indeed work to “French-time”, and when the kitchen fitters arrived this afternoon and I enquired ever-so politely about the delay, I received what I thought was an ever-so typical reply:

“C’était un poulet avec le fournisseur” – (there was a chicken with the supplier) In other words, clearly the supplier was having  problems and was nothing to do with the fitter. It must have been, I thought, a very big chicken!

However, the joke was ultimately on me! My fluent french speaking son assures me that I misheard (how typical) and that there was actually:

“Un boulet avec le fournisseur” (a mess-up, to be polite!) Frankly I prefer the more colourful chicken option, which leads me nicely on to the invitation to dinner.

Tonight I shall be celebrating the arrival of the fridge with French friends who have invited me as the lone “Anglaise” to spend the evening with them and several other couples.  One of the common misconceptions about the French is that they are always several hours late for a dinner party. When I first arrived in France I found this concept very  ‘inquiétant’. After all, how late should one be? When invited for our first French dinner party I suffered a not inconsiderable level of stress, even before I arrived, and that was before I crossed the threshold and attempted to speak French all evening. 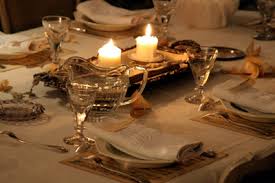 For the first French dinner party ‘Husband à l’Etranger’ and I were fashionably late! However it was quite clear, within minutes of arriving, that being late is not in fact “de rigeur”. And why? Because at a French dinner party, no drinks are served until the last invitée has arrived. To arrive late means to deprive your fellow guests of a drink for an inconsiderate amount of time. But when the drinks at last are served it will  invariably be Champagne and the party can begin.

Champagne is served as one might serve wine in the UK, with one major exception, it is served, and savoured. The French in general really know their wines, or Champagnes, and the morning afterwards, you will not find a dozen empties in the recycling bin, but one or two carefully selected and expensive bottles which will last the evening. And while there are millions of bottles of cheap wine circulating in supermarkets all over France,(I suspect for the millions of foreigners who stampede France every year) the French on the whole are highly selective. Whilst in Britain guests arrive for dinner holding a bottle of wine, the French have in general an “empty handed” policy prefering, if need be, to arrive with a box of special chocolates, generally exquisite, but costing a small fortune!

But French timing doesn’t stop there! One of the other extraordinary phenomenon regarding the French dinner party is that the French also leave on time. Our first dinner party, having booked a baby-sitter, we felt bound to return home by midnight. As we stood to go, we were astonished to find all our fellow guests stand in unison, and felt guilty that we had so clumsily terminated the evening. We are several dinner parties further on, and have discovered, to our quiet amusement, that this phenomenon of leaving together is universal. To save the host from numerous trips to let his guests out onto the street, (remember that the French have, very often, wonderfully ornate, but locked, metal gates to their gardens) the guests leave “en masse”. And so, after the coffees and digestifs have been served, the invitées start to observe and take their cues from one another, gradually closing the conversations in order to rise as one, around midnight, and leave!

Who says the French know nothing about timing? In general they are impeccable, although workmen all over France leave alot to be desired…

but at least now I can chill my Champagne!

And the pleasure I get from opening my new ‘bon marché'(cheap) fridge is definitely heightened by the wait.

And perhaps that was the point!