Over a year ago I was bemused by the way the local French authorities allowed thousands of litres of apparently fresh water to run unheeded the length of our street with no semblence of urgency to stem the flow. The construction company building a huge new apartment building on the opposite side of the road even went as far as to construct for us a tarmac  ‘bridge’ in order to access our courtyard. Since then, in a slow threatening way, the buildings around and about, most noteworthily, the Hotel Dieppe, began to suffer severe structural subsidence, and still the French attitude was to ‘prop’ rather than to repair. It was all quite disconcerting!

Then, during a bout of research on the fountains of Rouen, I started to piece together the real story. My neighbourhood, now in the thick of the urban fabric of the city centre was once pasture land just outside the medieval city walls. Towering above it was the Chateau Bouvreuil built in 1204, of which only the Donjon (sometimes erroniously named Tour Jeanne d’Arc), one of the original seven towers now remains. The boulevard which separates us from the Donjon was once the site of the ramparts to the city walls, which themselves played host to ‘echoppes’, small roofed stalls selling artisan and market produce from the pasturelands just beyond the gates. And bubbling up from deep below ground in this fertile landscape beyond the walls, a stream, the Source Gaalor.

The Source Gaalor was hugely important for the city, and was one of several streams to provide clean drinking water for the city within the walls whilst irregating the kitchen gardens and potagers and farms which fed the city outside. One of the most important fountains fed by it, still present, but no longer running, is that of the Gros Horloge, the Western gate of the city until the end of the 12th century. In 1525 Jaques Le Lieur, Grand-Maitre des Eaux et Forêts (grand master of water and forests) charted Rouen in a spectacular ‘Livre des Fontaines’, a book of watercolour paintings showing cross-sections through the city detailing the location of sources and fountains, which still exists to this day in the museum archives. The ‘Livre des Fontaines’ is a work of art. 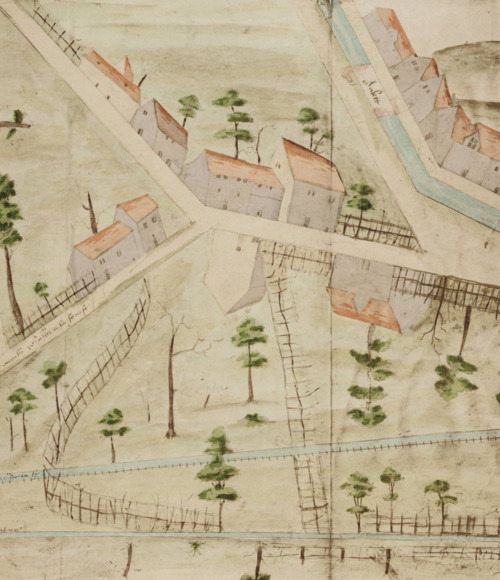 When I began to investigate more thoroughly, along with other ancient maps of my neighbourhood I couldn’t help noticing that the source Gaalor seemed to burst through the ground in line with my very own gateway! It dawned on me why the city council had not rushed to stem the flow of our 2012 giant water leak. The construction workers at the building site across the road had clearly pierced the underground culvert that carries the 21st century Gaalor’s unstemmable waters down through the city to the Seine. Despite this life source, destruction was hapening. The source of water, and the demolition of the existing buildings to make way for the new apartement block had acted together to wash away and destabilise the foundations of many of the surrounding buildings. Pavements now tilt at an alarming 45°, and a local empty shop closed during the height of the recession remained gloomily closed, despite rumours that someone had bought it. Gossip had been running boundless since early last summer that we would once again have a vegetable shop in the quarter.

Then suddenly in September, the blacked out windows were scrubbed clean, the lights switched on, and the shop front decorated. Instead of the tatty, down at heel fruitshop of yester-year, a real phoenix from the  ashes. Its presence somehow all the more appropriate thanks to the history of the area. We have a new ‘Primeur’ in Quartier Gare, and its fruits and vegetables are luscious, its cheeses ripe and oozing, its wines and coffees sophisticated. And just as we can credit Jaques Le Lieur’s watercolour paintings as a real work of art, the new owners have created their own delicious ‘still life’. The ‘Potager de Sophie’ where a real potager once would have been far back down the time-line.

So shopping for vegetables has become something of a visual delight, and I wish Sophie all the best for the new year, hoping that the gossipy queues of her predecessor are quick to rediscover our new primeur, and to regroup while she weighs up Normandy apples for a Tarte Tatin, or a crotte de Chevre for a crusty piece of bread!

And to all my eighteen thousand readers of 2013, WordPress tells me that you would have filled 7 ‘sold-out’ performances at Sidney Opera House if you had all got together.

Thank you for reading and a
happy new year to you all!