A couple of days ago a fellow Normandy blogger posted several photos of the early morning mist rising up over the river near her country home. The early signs of spring and the promise of a glorious day! Looking out of my dining-room window from the breakfast table, from where I have an excellent view of the hills of Mont St Aignan, I too was enjoying that low lying spring morning haze and the clear irridescent blue sky above …or so I thought!

Ten wonderful days of sunshine and Rouen and much of northern France has been basking in temperatures reaching 20°, and after a long winter the warmth is very welcome. But our pleasure hasn’t lasted long. The warm sunny days and cold clear nights have made impossible the daily dissipation of pollution. Each day the pollution levels have augmented until last friday the readings rivalled those of Beijing, one of the most polluted cities in the world. That romantic mist is none other than smog, and the numbers of people seeking help for respiritory illness has spiked.

On friday, along with Paris, Rouen made all public transport free, and the SNCF and RER, France’s national rail networks made local and intercity train journeys free too. The Velib (velo libre – bikes at liberty) found in special bike racks all over the two cities were also made free of charge. These gratuities were due to last until sunday night, and consequently a free rail trip to visit Paris on sunday seemed a happy bi-product of the climatic conditions. But would one really want to visit Paris at the moment? The answer for most is probably no. On friday, in Paris the pollution readings measured 180 microgrammes of particles per metre cubed where the alert is raised at 80 microgrammes per metre cubed. 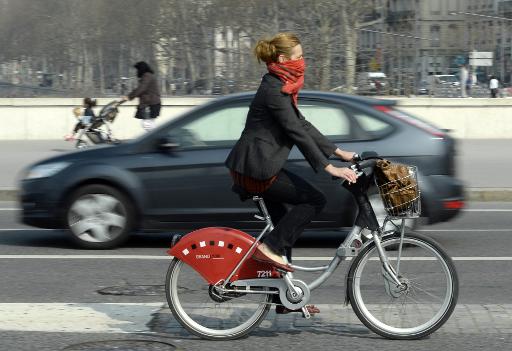 Velib in use but mask necessary!

By sunday night more extreme measures were put in place, and chat forums were busy denouncing or approving the measures depending on the individual standpoint. What caused the frenzy of opinions – “l’alternance de circulation”, In other words, today only cars and motorbikes with an uneven numbered number plate can circulate. No lorries are permitted at all, regardless of numberplate, and only vans used by the emergency services can cross the city. For those with an even numbered numberplate who attempt to drive in Paris and several of its suburbs, a fine of 20€. Only the press, rather bizarrely, and the police, obviously are exempt from the ban. But perhaps we should spare a thought for the police officers, who will number in the region of 700, and maintain order and issue ‘on the spot’ fines, whilst they stand all day in the thick of the smog. 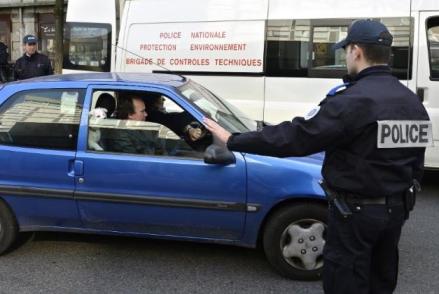 While many were congratulating the government on it’s tough stance, there were of course inevitably those who critisized the measures for being politically motivated, others that warned of a potential vehicle standstill in the city as a result of spot-checks, and a large number pointing the blame towards Germany and Belgium for their recule from nuclear power and back to fossil fuels, and the increase of pollution as a result. Many were dreading the increased journey times and feared the sardine conditions on public transport. One wise-crack thanked his dad for having bought him two cars, one with an odd number-plate, the other even.

For my part, I can do pretty much everything by foot, and the jury us still out as regards the journey to university today, not so much for the distance, but for the ability to be home in time for my children and the end of the school day. Leaving the city centre yesterday for the open air lido on the plateau above the city, the air seemed pretty fresh and most people were taking advantage of the sunshine to give their ‘bronzing’ a head-start, lounging happily by the out-door pool. 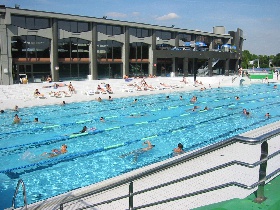 But despite the sunshine and blue skies perhaps it wasn’t really as fresh as we really thought?