On Monday I bought a house! In fact I have been looking for quite a while, and nothing has really stood out enough to entice me to buy it. Unlike many non-french people who buy in France, who have no particular need to be tied to any particular place, and have a “coup de coeur” on visiting a house in a tiny village or amongst rolling french countryside, I am very fixed to the small city in which I live and work, and where my children, all four of them, go to school. Hence the dream of finding a house became a major task. Where property in the countryside in France remains cheap, in the cities, as a result of  rural exodus, property remains often prohibitively expensive. There-in has lain my problem, finding the french dream in a the bustling city.

One of the major factors involved in house-buying in France is coping with the heavy fees associated. Price of home aside, the estate agent, or agence immobilière, demands a whopping 5% of the purchase price, and the Notaire, or lawyer demands 8%. The notaire can perhaps be partially forgiven as tucked away in his fees is the equivalent of the Stamp duty or land tax to the state which somewhat ofsets the rudeness of the bill. In comparison with the professional duties of the notaire, and his obvious level of expertise, the agent immobilier  gains ‘money for old rope’. What does the estate agent do for his money? He holds a set of keys, unlocks a door or two, and later, if it goes his way, makes a few phone calls on your behalf to negotiate the offers to the vendor. Is that effort really worth 20,000€ for a house of say 400,000€. Can such a bill really be justified? I decided not! 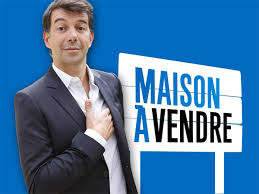 I made it my mission to avoid the estate agent. Without his fees I could offer more to the vendor whilst actually paying less than purchasing competitors who went through the estate agent. Essentially it works as follows: A house is put on the market with an estate agent, but the estate agent does not put up a ‘For Sale’, ‘A Vendre’ sign, nor do anything to make the property visible to the public. Essentially he puts the best view he can of the back of the house, or better still an interior shot into his agency window. Hopefully the photo is enticing enough to draw in the public, but invariably the vendor loses out because the pretty front facade is hidden from the buyers – all to avoid one eventuality, that the purchaser goes direct to the vendor. While in the UK, the fees are sufficiently low , and the ‘For Sale’ sign clearly displayed to prevent direct purchaser/vendor sales, in France the situation is absolutely the opposite. It is normal for a French agent to organise a house viewing but refuse to give the address of the house, name of the owner or any visual street view photograph, arranging to meet the prospective buyer at the corner of a couple of streets, at a local cafe, or preferably at the agency. The idea is that the minute they have crossed you over the threashold and/or introduced you to the owner they can claim their fee if the sale results.

Since the money at stake can be anything from 10-30,000€+, avoidance of the estate agent is a major benefit. Some houses sell by word of mouth,  friend to friend, associate to associate, but if all else fails a consistant letter-box fly-posting of requests for owners interesting in selling to contact you is second to none. I missed out on one beautiful house that I fell in love with because I ran out of fly-posts at the neighbouring house and never retraced my steps with more to post to the last few houses on the street. I ended up visiting it through an agent and kicking myself when a rival buyer outbid me. Had I not had the estate agent fees to contend with it may have now been mine. Another time I had searched intensively via Google Sattelite for a particular shaped garden path shown on an agents window photo, but ultimately, after all the searching and contacting the located house owner in question, a visit showed that the house wasn’t nice enough. Observing beyond windows shown in a interior photo shot to try to identify the colour and style of  front door on the opposite side of the road, or a church steeple, a letterbox or an unusual landscape or tree can bear results and each of these procedures have been rewarded with a visit direct with an owner.

So it was that at the weekend, after a rowdy friday coffee morning amongst friends swapping information on houses for sale, and a bit of zooming in and out on Google street view and sattelite to see what was on offer, I received a call from an owner of a very lovely house, responding to my attempt to contact him, inviting me to visit his home the very same day. Before the day was out I’d put in an offer, or proposition, and by the following day I was sitting in the notaires office signing the first document in the French house buying process…

…with not an estate agent in sight.

4 thoughts on “House Buying in France”