The first night in the new house I lay awake until the early hours. “Husband à l’etranger” was still held up in Canada and the house was frankly just a little bit scarey. While furnished the house had had a certain charm, but once the furniture had been removed it was altogether a different story. I lay in bed oscillating between extreme guilt for having asked the kids to sleep in this “god-forsaken” place, and the horror of touching anything. At the same time I was actually just a little bit worried about what “husband à l’etranger” would say when he finally arrived to see it for himself. I rehearsed ‘ad infinitum’, “shall we put it back on the market” before succumbing to a comatosed sleep.

Thankfully our friend and electrician arrived early the next morning and set to work checking the power supply. Over the day he increased the number of sockets by 1000% since we had arrived to find only 1 safe and operational. By the end of the day we had 10 sockets at our disposal, five in the kitchen, one each for the children and one for the sitting-room, which, since there was no pendant light-fitting meant that at least we could plug in a lamp. The rest of the sockets in existance were hastily covered in black tape to prevent us using them, and by consequence, risking burning our house down!

The afternoon saw me buying a new freestanding cooker and freezer, and when I arrived back at the house I discovered that Gerald had gone beyond the call of duty, smashing out the build-in and lethally dangerous oven and  hob and the decrepid units that they were built into. Since the cooker wasn’t to be delivered for a further three days, and France is not a country known for pre-packaged ready meals, cooking dinner was a test of creativity and determination.

The kids were appeased by the fact that the internet was up and running from day one. This, a remarkable feat since the ADSL line into the house dated to at least a half century and had been bizarrely wired through the swinging part of the external door, meaning that on his arrival, “Husband à l’etranger” opened the door with rather too much force  and ripped the cables out of their connection and to the horror of the kids killed the internet stone dead.

Contrary to my expectations, “Husband à l’etranger” wandered around the house exclaiming every few moments how much he loved it, then rooted around for a mop-bucket, scourers and magic cleaning solution and got stuck in.

If you think I was exagerating about the dirt, you may want a closer look! 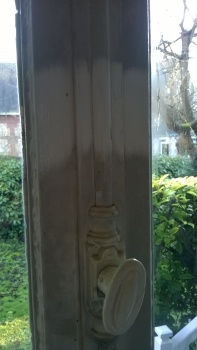 So there you have it – dirt at its grimiest!

And me with the ‘wonder-fluid’. If you look very closely you can see the ‘before’ to the right- hand- side of the window, and the ‘after’ on the left.

So if you ever have a bad day, and feel that you are not keeping up with the housework, take another good look at these photos, and I can assure you that you will quickly feel a whole lot better!