Husband à l’Etranger has been home on gardening leave for over a month now, awaiting his next “mission”, and has quite definitely been leading me astray! Not more than two days can pass before he’s chomping at the bit to get to a local brocante and have a rummage through all that’s out on display. There are several antique fairs and junk shops within a few short minutes of our house, and this morning, after both of us had dragged ourselves out of bed at 5am to get our 14 year old to his “stage” or work experience placement, and then i’d been kindly allowed to get back to sleep again while he did the car trip to the boulangerie at the centre of the “stage”, it seemed only moments before bacon sandwiches and freshly squeezed orange juice appeared at my bedside. Clearly Husband à l’Etranger was keen to get “antiquing” before the best things were gone!

Every time we get in the car we say firmly to one another “You’re not allowed to buy anything” – knowing full well that December the fifteenth is nearly upon us and represents the awful day when the council take our “Taxe d’Habitation”(resident’s tax), and our “Taxe Foncière”(home owner’s tax) out of our bank accounts in one enormous, and impoverishing chunk, leaving us destitute moments before Christmas. We always look at each other, our faces a picture of hardfast committment to the “no spending” rule, and then spend the morning hoping the other will crack the first.

Last week, Husband à l’Etranger had come home with two brass “fire-dogs” under his arm, which drew some chuntering on my part about promises and too much junk in the garage until he declared that they cost the grand total of 4€, and would so improve the burning capacity of our fireplace and consumption of logs, that he was let off.

The week before he managed to unearth 12 wineglasses that I had completely overlooked that matched EXACTLY our other 6 wineglasses that I had bought in an antique shop two years earlier. We both decided that this was a special occasion because now we could invite more than 6 people to dinner, and they were only 20€. You can imagine the conversation that ensued – Clearly they were meant for us and no-one in their right minds could turn down a bargain like that…could they? Even after the stall owner took 10 minutes to locate, having gone for a coffee, and with such a “cooling off period”, the glasses left with us. A dinner party is in the cooking.

But the largest item that has come home, is one that I bought without his “say-so”. About a month ago I came home with a dining-room table. It was in quite a state, and no-one in their right minds could say that it was pretty. But I had got fed up with the kids arguing about who could put their feet on the bar running under the centre of our old table, and squeaks about squashed feet, and then I discovered this one in a junk shop with no central bar and I knew that with a bit of t.l.c it was a keeper.

It sat in the garage while I blew hot and cold about it, and then finally a fortnight ago I got to work.

So here it is , all orangey red varnish, looking very forlorn: 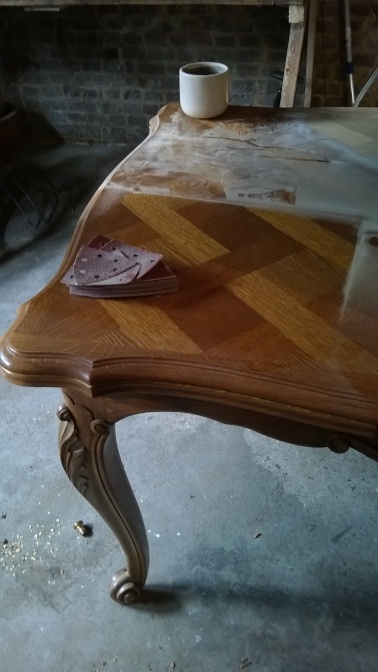 and a day later, sanded clean:

I’m not a big fan of varnish, so when I discovered our local DIY shop sold “invisible” varnish I decided to give it a try. Afterwards I painted the legs with a white primer, followed by a pale grey/taupe matt paint and rubbed them lightly to distress them, and here is the end product: 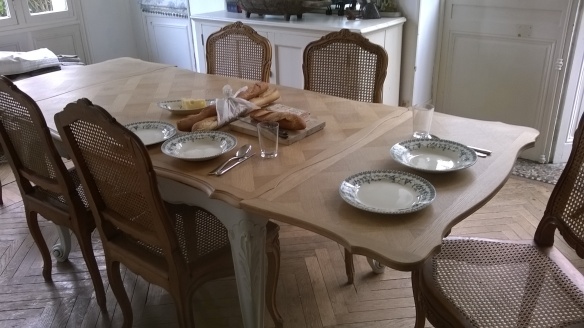 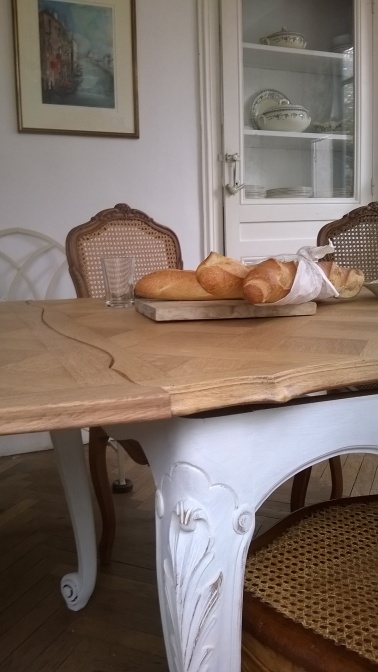 It has a neat table extension system (rallonges) where the end pieces slide under the main table to shorten it. 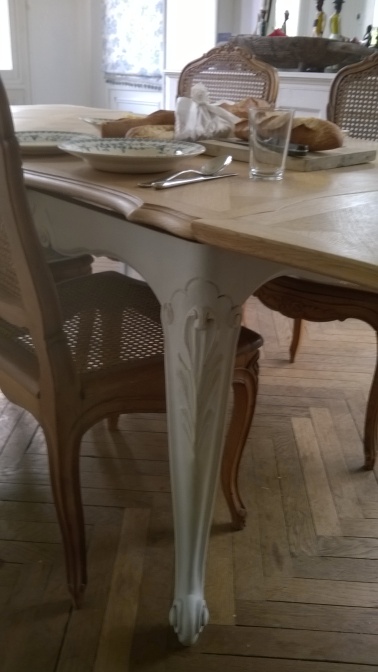 Perhaps in front of the fire next to the “dogs” suggests Husband à l’Etranger.