When I was very young I had a terrible aversion to learning to ride a bicycle. In fact, once I finally mastered it I had reached the grand old age of eight. The problem was that I was terrified of falling off and scraping my knees on our gravel drive, and it was only, one day in deepest winter, when the thinnest smattering of snow scarcely hid the worst of the sharp gravel edges that I finally got my bike out of the garage, clearly believing that the couple of millimètres of snow would cushion me from a nasty fall.

Last week we headed off to the Alps to ski. Now, as ever, I take my time about things and had never tried skiing until I was 46. While my husband and children scream down the slopes at speed, my kind of skiing is rather more gentle, but I love it all the same.

Just before we left I joked to my friends that if I arrived back home with all my arms and legs intact that I would invite them all to dinner to celebrate.

Our first day on the mountain was one of exceptional beauty with vivid blue skies and crystal clear air,  the type you can only find up a mountain, and coupled with a temperature ranging between 16 and 18 degrees. What I didn’t expect to happen was to be struck by terror in front of the first slope with an irrational fear of crashing headlong of the edge of the piste, especially when the slope in question was before getting to the first télésiège. The clarity of the view brought into focus the pitch of the slopes and momentarily I was paralyzed by them. Ultimately I fell back on skiing down an alternative slope and then removing my skis in order to reclimb the incline to have another go. By the end of the day I was exhausted though happier about my slaloming skills and determined to take myself to task the next day. 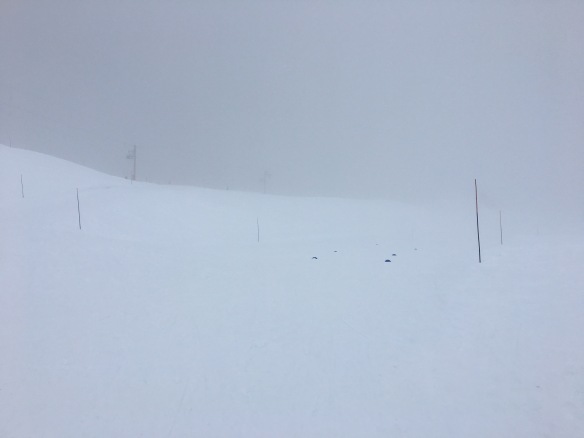 The mountains of course have a mind of their own, and the next day dawned with even the lowest pistes shrouded in dense mist. It was however my eureka moment. No sooner on the slopes than I réalised that, much like with the smattering of snow when learning to ride my bike, I could no longer see the source of my fear. In fact the piste running down to the télésiège seemed to blanketed and softened, and definitely shallowed by the mist. So much so that I threw myself off the brow of the slope with abandon, up the télésiège moments later and never looked back. By the end of the week I had mastered all sorts of slopes that I hadn’t tried before and more importantly, I arrived home all my arms and legs intact. Dinner  with friends was the logical conclusion.

I decided, as you do when flying the crest of the wave , to set myself yet another challenge. This time to cook something out of my comfort zone. After a week in the Swiss Alps thoughts naturally turned to melted cheese and mountain goats and I decided to tackle the dreaded cheese soufflé.

I found a wonderful recipe for Twice Baked Goats Cheese Soufflé. And what particularly attracted me to it was that by doing the first bake in advance you would actually know if it souffled effectively before doing the second bake when the hungry guests were eagerly gathered round the table.

I am pleased to say that making a souffle really isn’t as difficult as people make out, although I attribute a certain amount of my success to Arnaud, the excellent pâtisserie chef that I worked with all last season who gave me a good training on the various principles behind beating eggs, egg age and temperature when it comes to giving things “lift”.

The recipe is simple enough. If you can make a decent smooth white sauce, crumble goats cheese and gently fold in soft whipped egg white then you shouldn’t have any problem making a cheese soufflé. 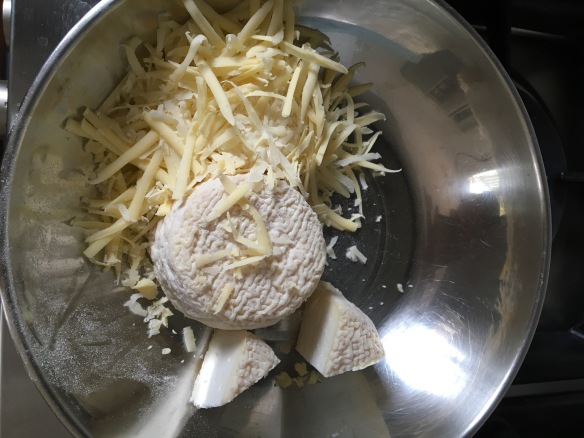 Next select a strong tasting goats cheese. I added some mature cheddar and some grated Parmesan for good measure. 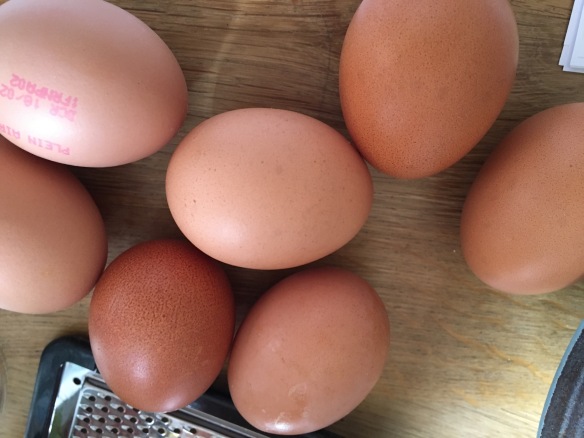 Have old eggs at room temperature.

Weigh out all ingredients in advance, lots of fresh chives are perfect for this recipe. 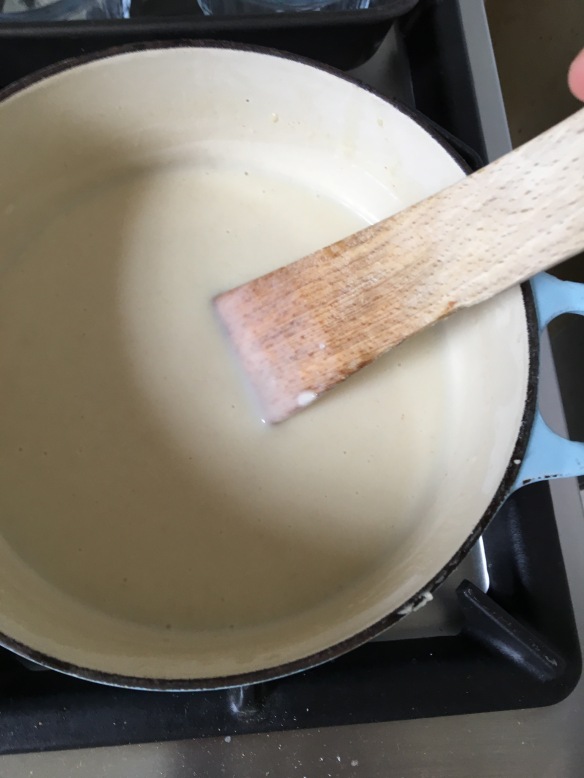 Simmer the milk and then strain out all the bay, onion and peppercorns before  adding to a roux of butter and flour. Simmer stirring all the time until a thick creamy sauce is produced. 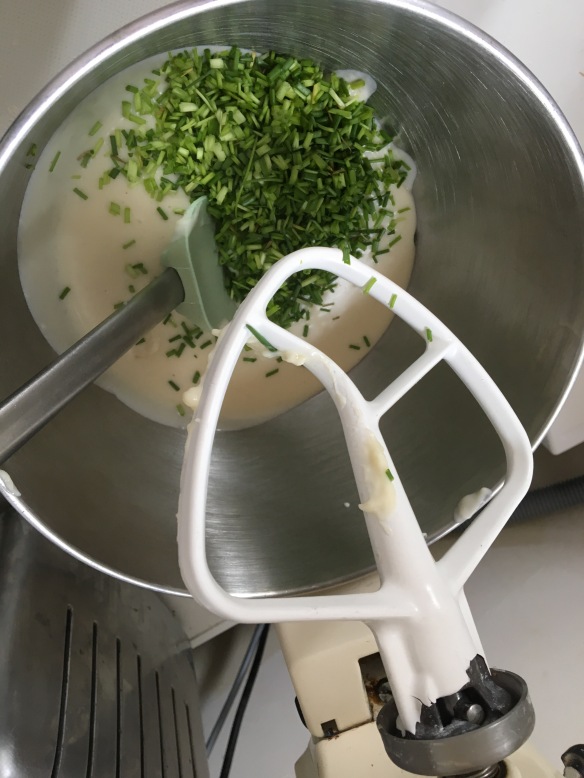 Let cool slightly before adding the chives and beat in the egg yolks on at a time. 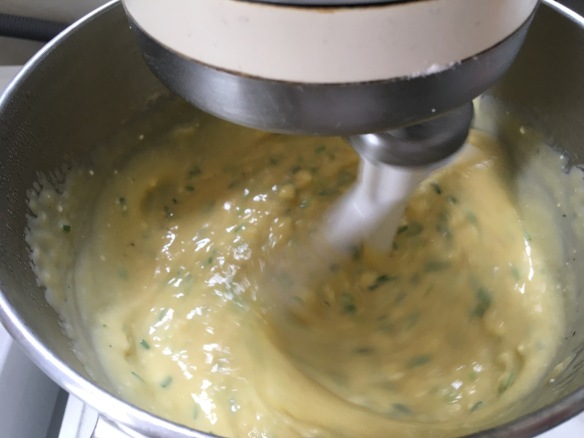 Then add the cheese and stir thoroughly. The warmth of the sauce will begin to melt the cheese. 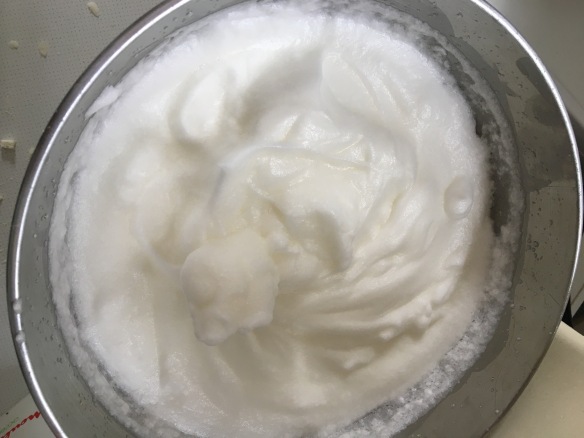 Place into ramekins which have been buttered with an upwards motion and ensure there are no dribbles. Both glass and ceramic ramekins work equally well. I used a mixture. 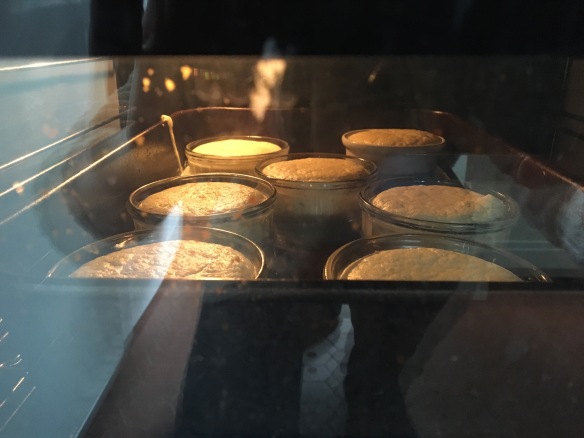 Place in the oven at 180 degrees for 15 minutes. Both fan ovens and standard ovens work equally well.

And watch them rise! 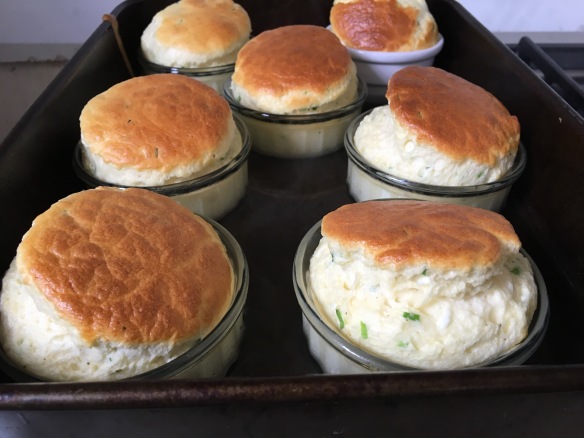 And start to fall – they only hold their shape for a minute or so out of the oven! 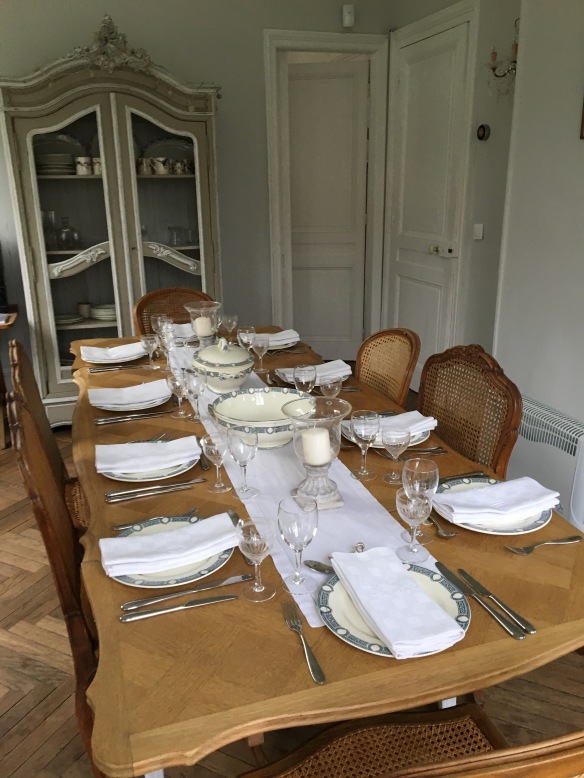 I hope you remembered to lay the table!

Once the soufflés are cooked you can eat them after the first bake, a light and fluffy goats cheese fork full of heaven. Or you can let them cool, and gently turn them upside down out of their pots onto a sheet of baking paper covering a metal tray. These can be kept covered in the fridge a day in advance of when you want to serve them.

15 minutes before the guests come to the table, bake for a second time for 15 minutes at 180 degrees, or until nicely risen  and golden, with a slightly crispy shell.

Delicious served with a crown of tender lettuce leaves, a few slices of fresh fig, parmesan shavings and a salad dressing of fig vinaigrette. 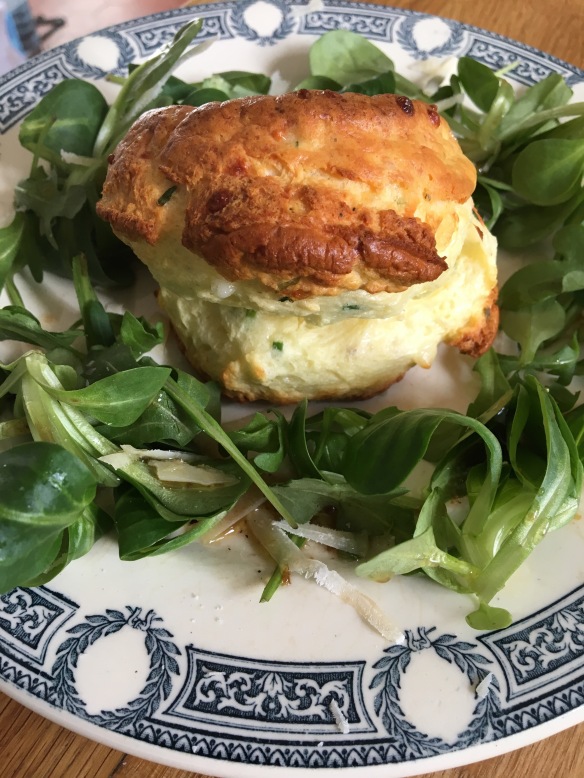 14 thoughts on “A French Dinner and a Twice Baked Goats Cheese Soufflé.”