I met an 82 year old woman yesterday who has travelled to France from Australia to visit Giverny, the home of Claude Monet.

“I studied fine art as a student” she explained to me, ” and that’s when I fell in love with Monet’s paintings.” When she graduated, she married and settled in England and her greatest wish was to visit Monet’s famous gardens. Her husband didn’t support her love of art, declaring. .

“Why would you travel to another country just to visit a garden?

Now at the age of 82, divorced, with difficulty walking after an accident, and despite living in Australia, this lovely lady had thrown caution to the wind and flown across the world to make her dream come true.

“I knew if I didn’t do it this year, I never would” she said, and I am happy in the knowledge that today she will have a fabulous day. 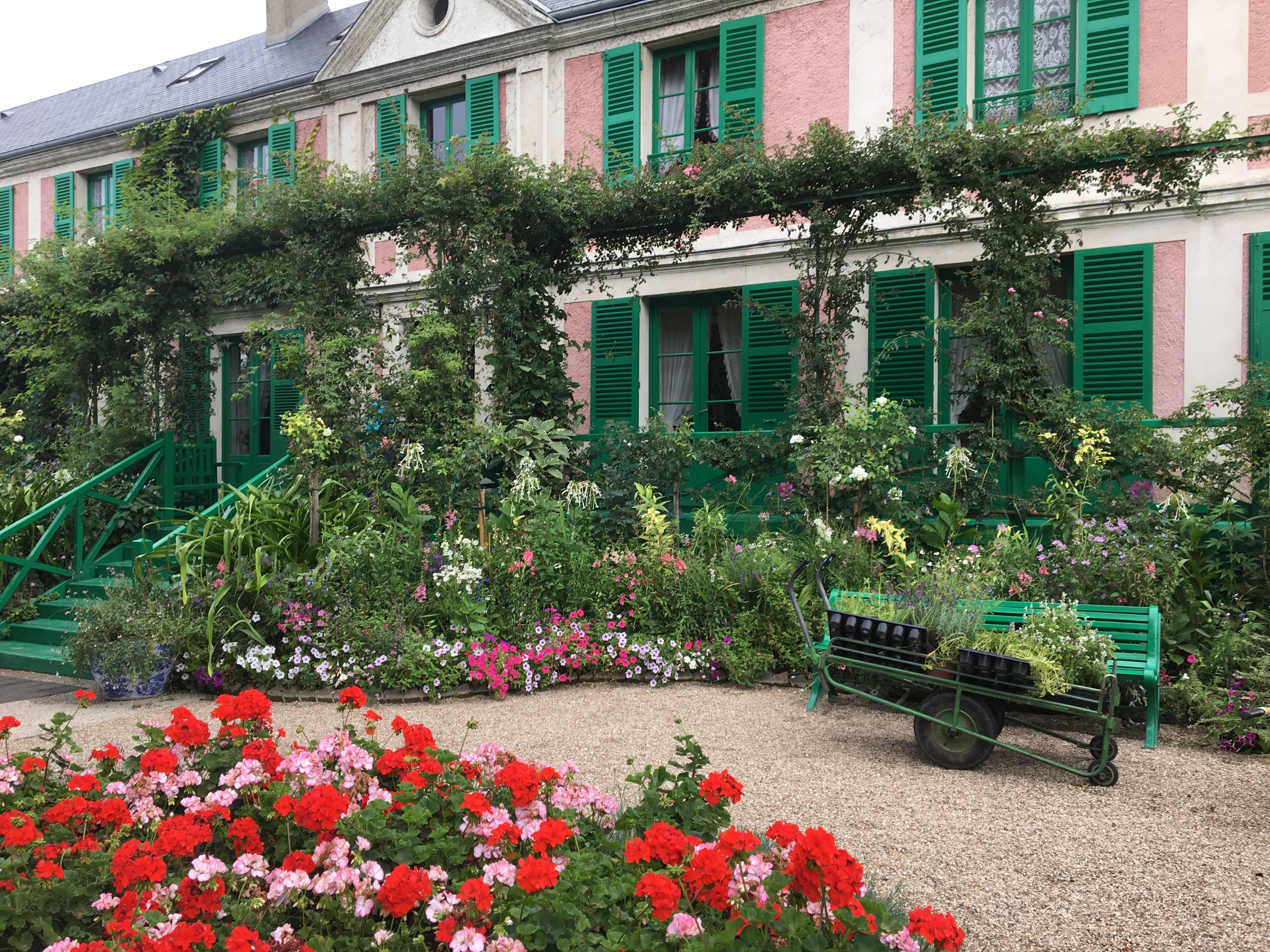 We might have arrived at 8 in the morning, but Monet got his first view of his future home at Giverny in the early afternoon. He’d left his rented house in Poissy, the creditors at his heels, declaring he would not return until he found a new house for the family to live in.

Imagine passing in front of this great house, and spying from the road an orchard in full spring blossom where the flowers are today, while the pretty nasturtium lined central allée was originally a dark and brooding yew lined pathway. Monet detested the way the trees blocked the light while Alice, his wife, felt that it was a crime to fell a tree. Persuading her to let him remove the lower branches, Monet subsequently lopped the tops much to Alice’s indignation. The denuded trunks soon became the supports for his climbing roses, until rotting away they were replaced by the metal arches we see today. 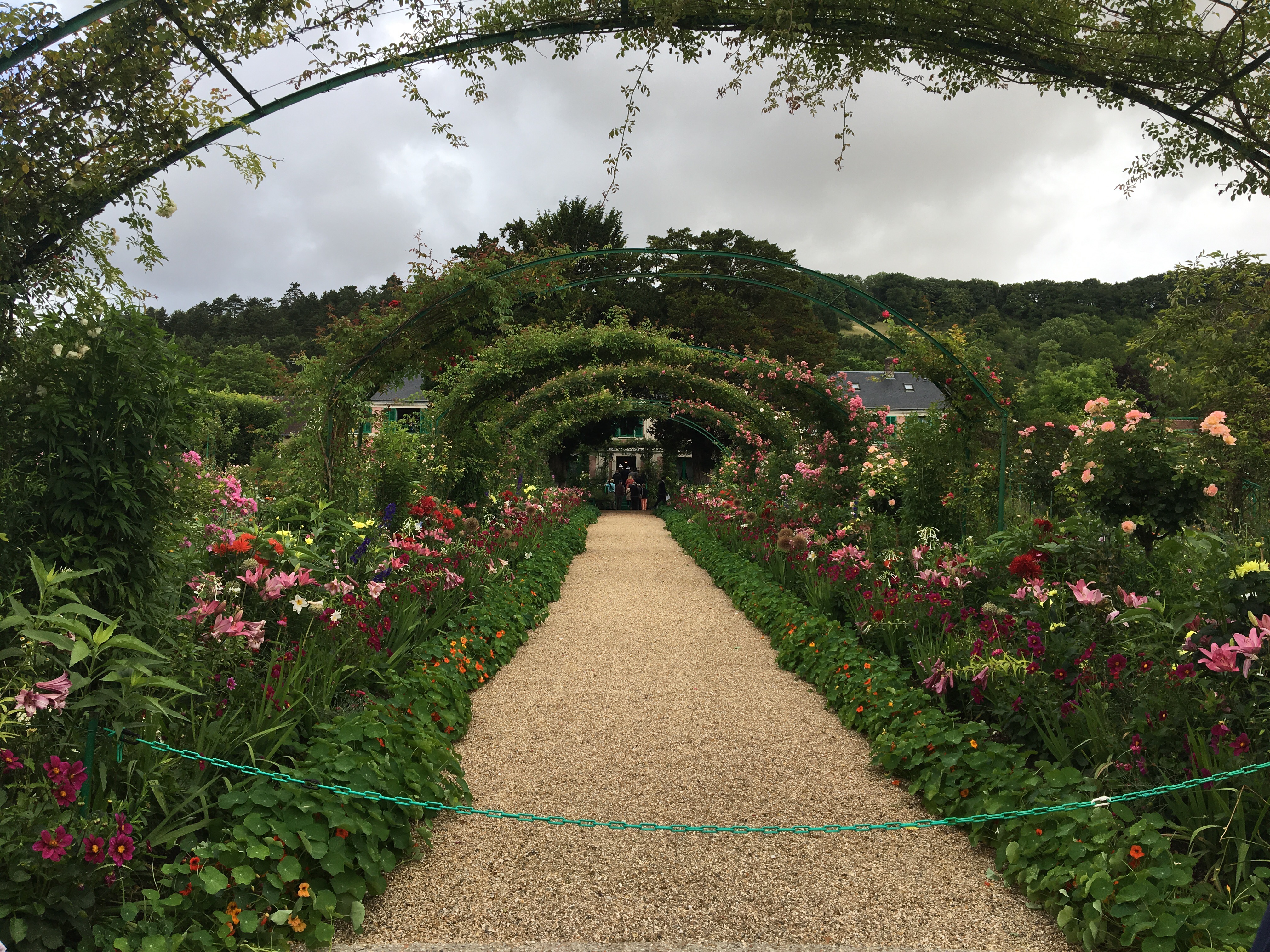 As the seasons change, so does the garden. Irises and peonies are replaced by poppies and roses, and later by phlox, cosmos and dahlias. The abundance of flowers is overwhelming, even on rainy days one thinks the sun is shining, such is the colour and cheerfulness of the surroundings. 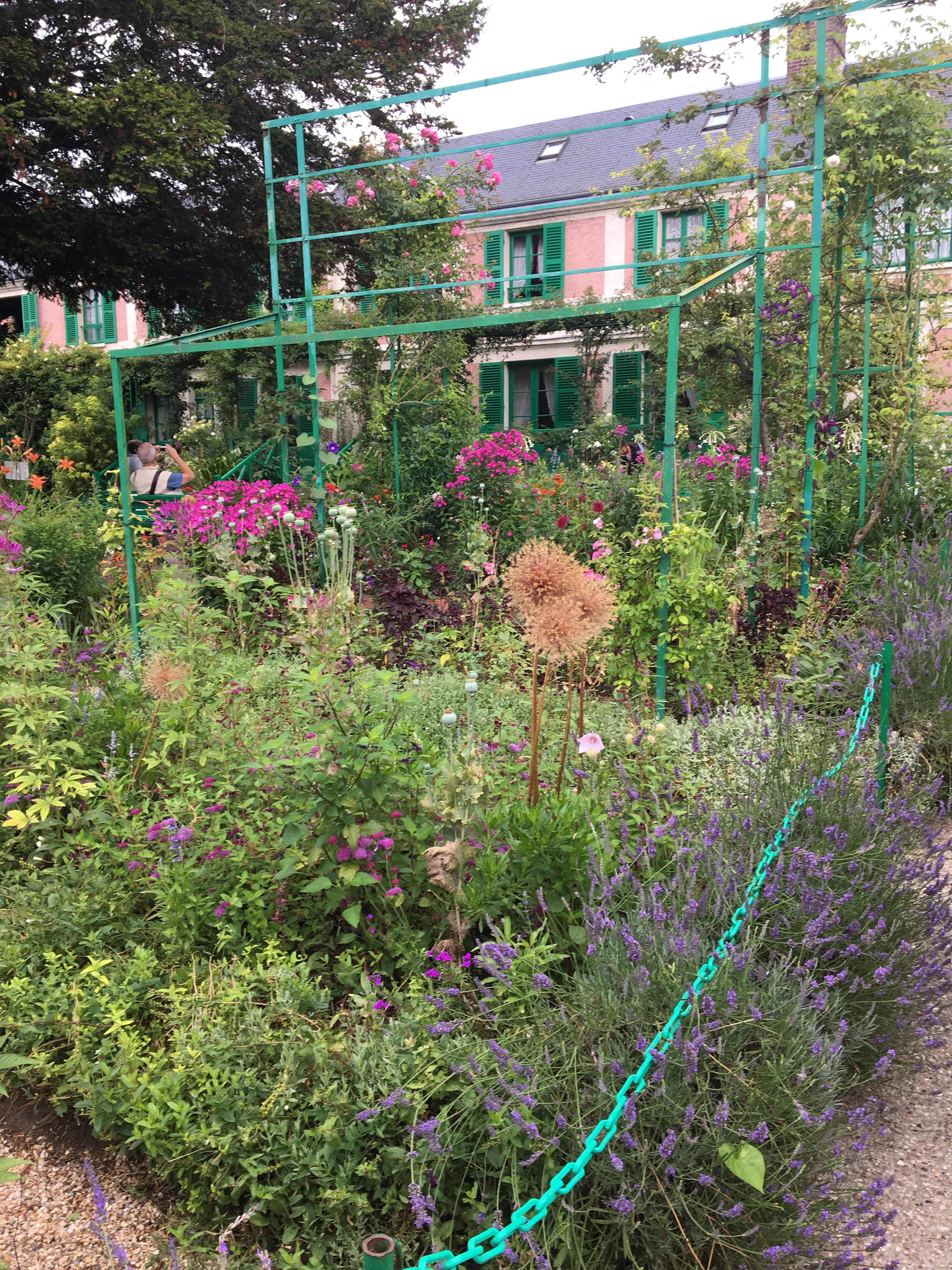 Monet had ten gardeners once he had fully developed the gardens; today there are only 6, and an army of volunteers who classify the deadheading of the flowers “a gros boulot” , a big job! Pissarro’s wife once commented favorably on one of Monet’s irises and Monet subsequently dispatched a cutting of them to her on the next train!

At the age of 50, 7 years after moving into the house, Monet started to create the water garden. Today there is only one gardener allocated to tend to it, and much of it is done by boat. Most of his activity is tending to the water lilies which are a great delicacy for the Muskrat.

He has to ensure that the lilies grow in nice circular rafts, just as Monet liked them.

After Monet’s death the garden fell into disrepair and had to be largely recreated. Alice had insisted that he write to her everyday when he was away painting. From his letters, his gardening instructions gave the restoration team a good idea of the type and position of the original flowers, and other little notebooks and seed order books held the rest of the clues.

Today the garden is a masterpiece. A living work of art, just as Monet wanted; his largest canvass.

“Gardening was something I learnt from my youth when I was unhappy, I perhaps owe becoming a painter to flowers” said Monet.

Not surprising then that the lovely 82 year old I met yesterday was so keen to go and visit it.

I truly hope it is everything she hoped it would be – and more!