I’m sorry if there’s been rather a long silence on the blog, we’re just getting back on our feet after a house-fire. I really can’t believe I am writing those words as now the event simply seems astonishing and quite unbelievable, and every so often I think I imagined it – until I go into the kitchen that is, and see the large space where the dishwasher used to be.

We were very lucky, and all the more conscious now of how important fire alarms and extinguishers are, as they made an exceptional difference to the eventual outcome. We all got out of the house unscathed, my husband was bravery itself mastering the flames by the time the firemen came, and we still have not only a house, but a kitchen that is once again operational. But if you don’t have fire extinguishers, go and get some now – yes, really, now! I’ll wait till you get back!

As you can imagine, the manufacturer of the dish-washer will be getting a stern letter asking why our dishwasher would choose to spontaneously combust at five o’clock in the morning. 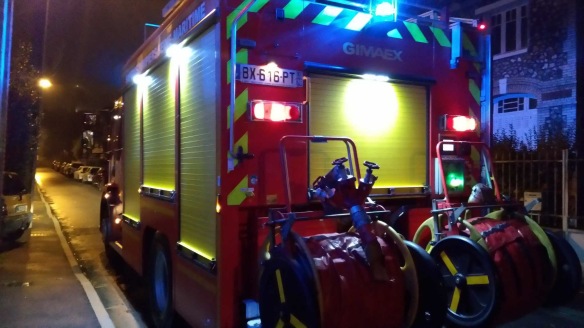 But I want to transport you back in time to the endless days of summer, when the sky is blue with the occasional cloud scudding across it. And I want to dedicate this post to my sister, who finally lost her brave battle with cancer just when the early summer flowers were coming into bloom. My sister adored gardens, and was my choice person to join me to visit ones of renown, to discuss garden design, planning and our favorite scented flowers. We’d planned that she would come and recuperate in the hammock under our cherry tree, giving instructions on what next to prune or plant, interspersed with essential cups of tea and cake. “Everything can be resolved with a cup of tea and cake” she said, though in the case of my garden we would probably need an awful lot of it.

Sometimes you need a visit to a beautiful garden to restore inspiration and energy and we’d had the plan that we’d visit several french gardens during her convalescence. The Jardin d’Angelique is one such place we intended to go. 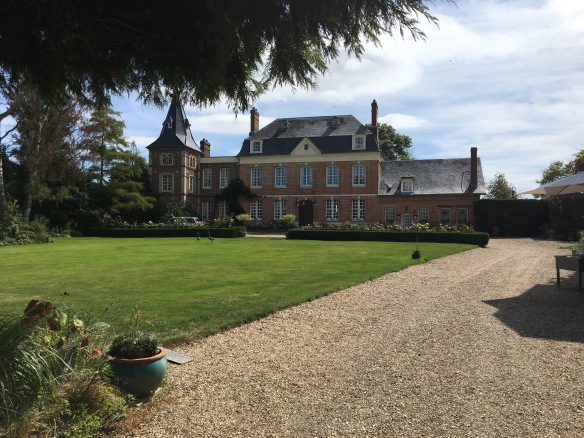 I was surprised to find that the Jardins d’Angelique weren’t the opulent gardens of a vast chateau, but the rather more lowly “maison de maître”, or master’s house. The grounds were divided up into three unequal parts, a large lawn in front of the house edged with flower borders and a long high hedge, through which I found a long and intriguing organically laid out woodland garden, and finally, behind the house, a manicured formal garden.

The archway in the hedge beckoned me to explore the woodland garden first, and after only a few moments I found myself in a shady clearing with a convenient bench, and mossy stone sculptures peering out from under glorious rose bushes and unusual hydrangeas. A few sinuous paths later, a sunny clearing, also with its bench, and the plants meticulously identified with little wooden labels. As I walked on, it was clear that this garden was one for reflection and peaceful isolation away from the hustle and bustle of the house itself. 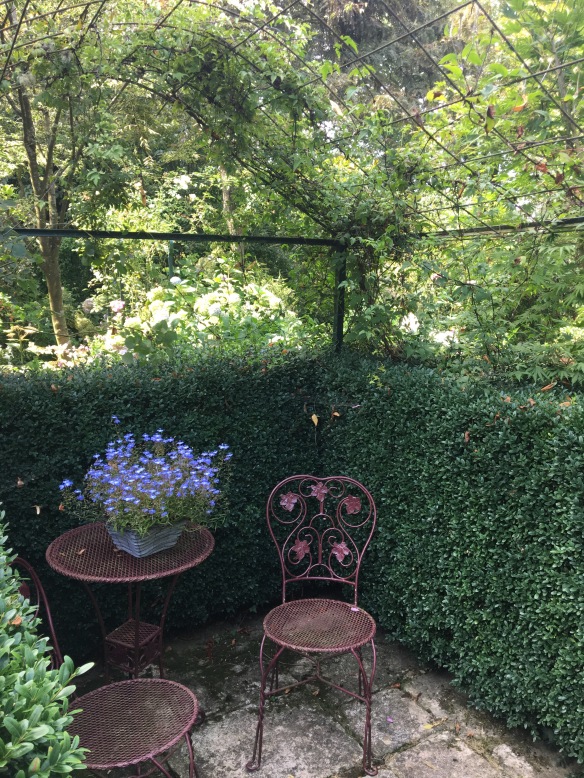 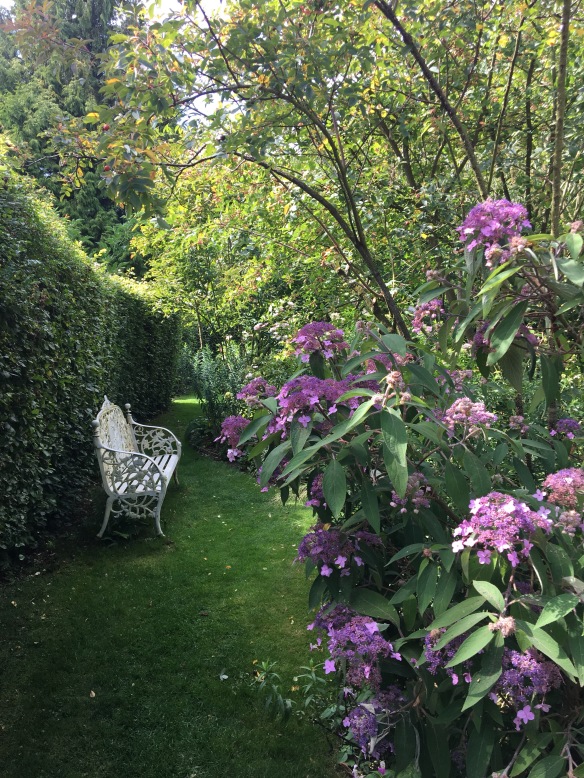 Here and there a pond, or stream: a bee”hive” or an Arbour: and finally, around another corner, an elderly lady with silvery hair, sécateurs in hand pruning à rather lovely ancient white rambling rose. She turned out to be the owner of the gardens, and I asked her if she had a grand plan when she first started creating the garden. 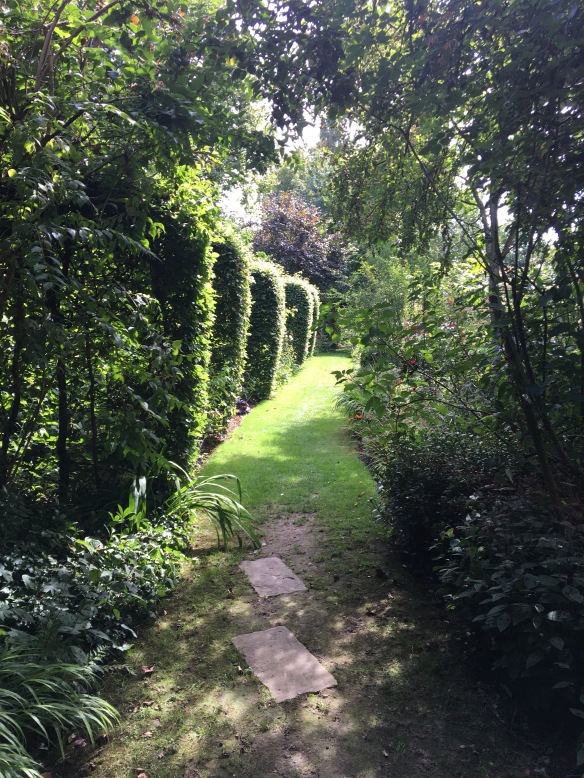 “Oh no!” She exclaimed, and went in to tell me that the woodland garden had grown organically, stage by stage as she had sought to distract herself after the tragic death of her young daughter Angelique. Each time she created a new area she placed a bench to sit on, or an arbor to sit under out of the hot sun while she rested from her travails and took comfort in her flowers and reflected on the impact of losing her daughter.

We went on to chat about natural remedies for common garden pests and diseases, before she took up her secateurs once more, and I went on my way to discover the formal garden and it’s topiary. 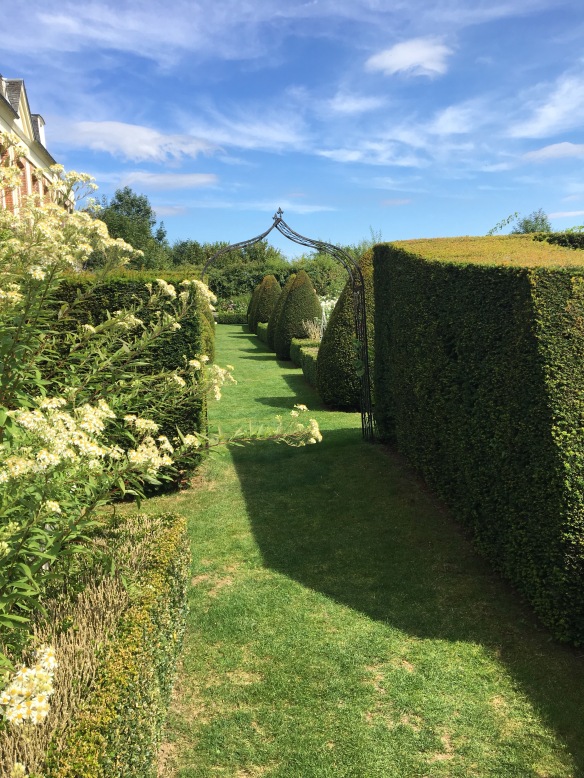 I love formal gardens, and box hedging restraining willful, abundant and blousy blooms. The pond, with its lions as guardians was a lovely focal point. 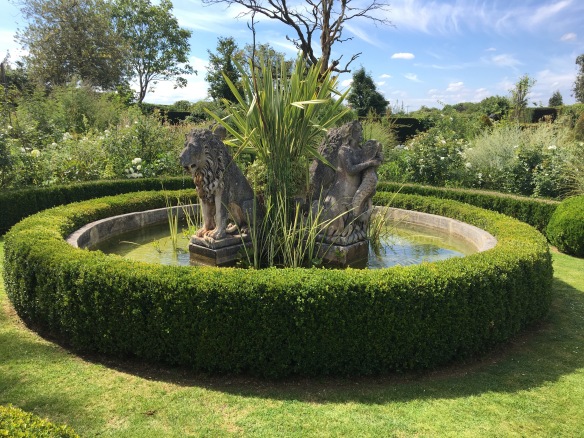 I spent some very happy moments enjoying the contrasts between ordered and racy plants. 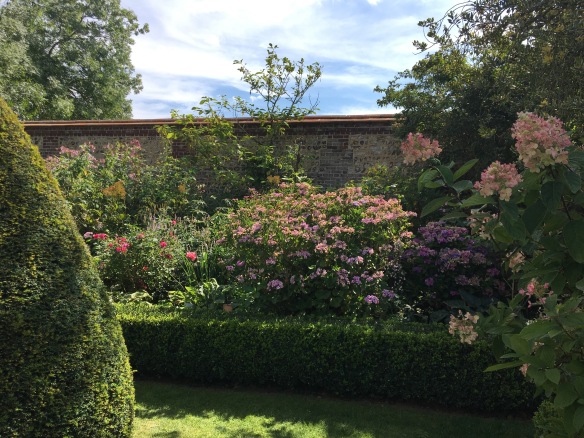 But there was something that drew me across the garden, that no other part was capable of.

There in the garden was a tree, not like those in the woodland garden clothed in foliage, but completely bare of leaves. The tree was completely dead, just it’s silvery bark reaching up into the beautiful blue sky. And where the leaves should have been were oblong wooden paddles, hanging, tied by wire to its branches.

First one way, and then the other. Endlessly turning in the light breeze. 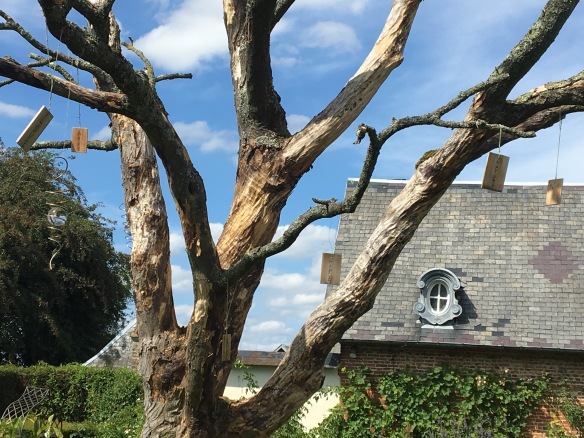 And on each paddle, in both french and english, a word.

I sat under the tree for some while just watching them spin, reflecting, and then headed for home. 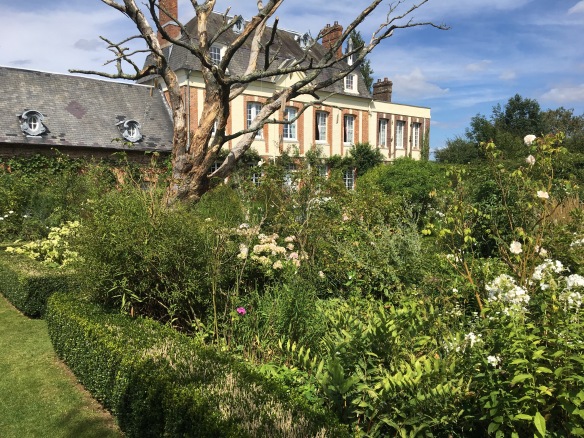 And later I discovered that quite by chance my camera had taken its photo of the tree under “burst” mode, and so when I looked again at the picture, for a few brief seconds the paddles were spinning – and continue to do so today.

Amongst all those photos of the garden captured in stills, the tree seems now to be the most living of them all.