Two massive cracks of thunder and suddenly the rain has started pelting down. I’m lucky to have just got in in time from gathering flowers for the vase on the table in the hall.

This time of year is particularly lovely in France and my peonies have chosen to flower plant by plant, one after another, the length of the month of May. And now the Lupins and the fragrant roses are also putting on a blousy show, but their scent is nevertheless having a hard time outdoing the Mock Orange.

Beds that we’re uncultivated last year and were planted with flowers bought from a flower stall near my sister’s hospice at the time of each of my frequent visits are now growing strongly and producing their first blooms. I particularly love the white peony which has given four beautiful flowers in its first year. 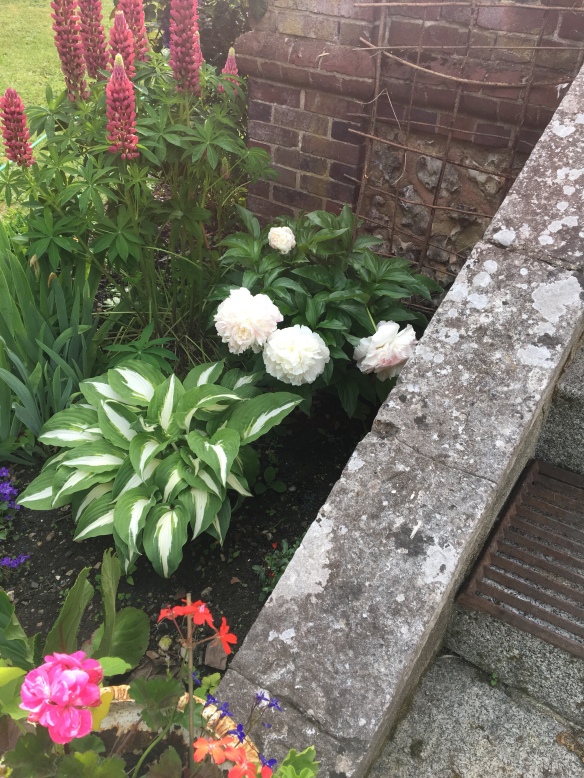 I have taken refuge in the conservatory which is a hive of activity, though not of the floral kind just yet. Husband ‘a la Maison’ is busy restoring all our windows and the conservatory is the ideal location to work from. One day soon we want to restore the conservatory itself, but it’s a large and daunting job. 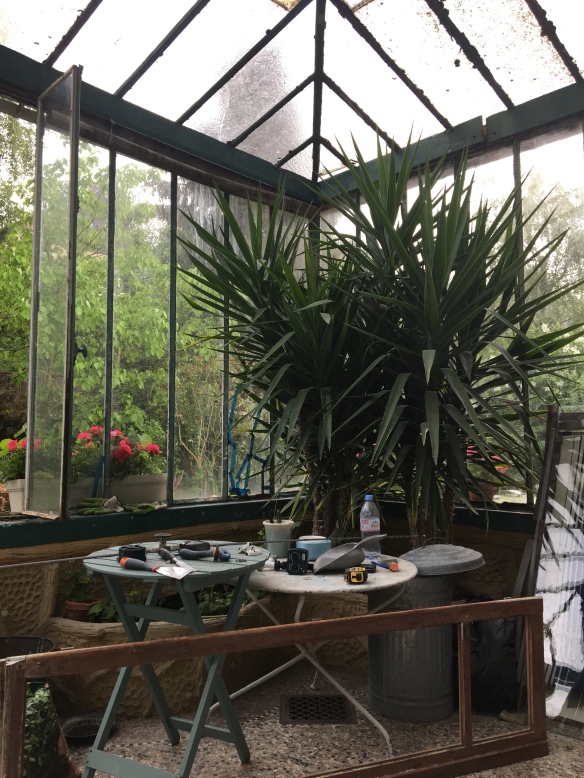 You can see the pane of glass carefully set aside and the frame being scraped back to its original wood. The deep reveals of our windows mean that the windows have been protected from the worst of the elements for over a hundred years and there’s not a trace of rot. So far the balcony french windows are all completed and this is this year’s second set of ordinary windows. Only two more sets to go after this and all the windows will have been restored and repainted.

I’m taking refuge from the rain and thanking it for doing the evening watering for us. The thunder is a constant rumble with frequent flashes of lightening. It must be nearly overhead. When it stops I will have to go out again and shake the Peonies heads as the rain has filled the blooms since I came inside and they’re drooping so low with the weight of the water that their heads are nearly touching the ground.

But on dry days our new outdoor tap is doing a great job keeping everything watered.

If it wasn’t raining I would be lounging in a hammock enjoying the garden, but the conservatory is the next best place and at least when the storm passes over we may have a cooler, less sticky night.

Have a great week!

9 thoughts on “Sunny days and stormy evenings in Normandy”