When we arrived in France seven years ago we threw our four children into french school. They were aged between six and twelve at the time. Normal, you might say – well not really, as they didn’t have a word of french between them. When I picked up my daughter on the first day after a couple of hours she was looking decidedly stressed, if not a little close to tears. In an attempt to soften the blow we gave them all mobile phones, thinking that they might be able to text us for translations of the more tricky words..

But those phones were confiscated by the well-meaning staff in order to force them to integrate. And amazingly, integrate they did. One by one the language got under their skin and by about a year they were fabulous french speakers.

Being fabulous french speakers, and being fluent and bilingual are not the same things. There are still days, seven years on where words do not come, coloquial meanings are a little ambiguous or words simply do not exist in the alternative language.

Incredibly my children haven’t really complained about the process although there are certainly days when they have felt tested, and in those moments they have muttered inwardly, and outwardly,

And I in those moments have boyed them up in motherly fashion saying,

“because one day, and you never know when, this will all make sense, this will become an advantage and suddenly a door will open for you”,

and I always hoped it would!

And then suddenly, just when it was least expected, an opportunity came. An email popped in my inbox from the organisers of “Terres de Paroles” with a tentative question,

Only days earlier my sister-in-law and I had been messaging about a canadian author, a friend that she knew from her home town of Waterloo who was touring Northern France for her book tour. Carrie Snyder, author of “Girl-runner’, or more poetically known in France, “Invisible sous la lumière”(Invisible in the light) was in Rouen. At the last moment the organisers of the event had found themselves without a translator. I volunteered my daughter, now 19 for the opportunity. 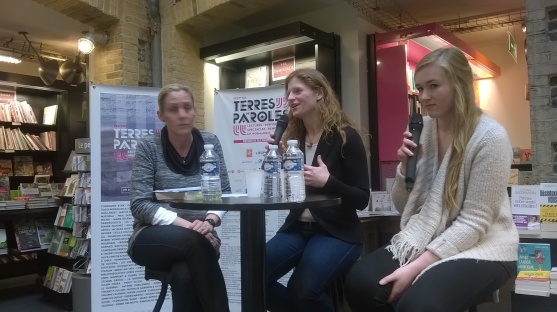 Translating is always easier from the foreign language to your native one, but this event required translating in both directions which involves remodulating, interpreting and rephrasing the dialogue on the spur of the moment in front of an audience avidly waiting for the ‘raison d’être’, the inspiration, the motivation and the explanations  that the author wants to share about their book.

And as much as I was intrigued by the book, the characters, the setting and the plot, I was also thinking,

“This is why,…. this is why you have braved what we inflicted on you all those years ago”

..for my daughter seemingly effortlessly translated the long dialogues and questions from the french presenter to Carrie, and took to the microphone to return to french the canadian author’s responses for us. 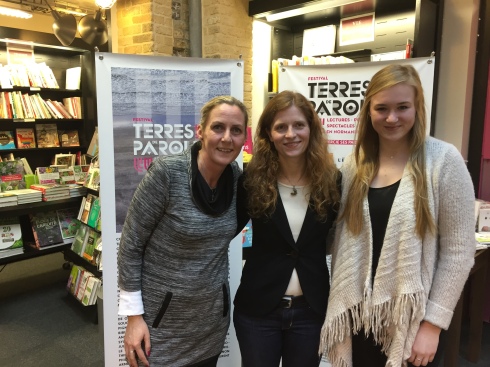 Carrie signed for us a copy of her book, which we are excited to read. The french title seeming so much more succinct to us, a finger on the nerve fibre of the book, the raising of the achievements of a sportswoman, hitherto hidden in plain light of day under the discriminations of the era she lived and performed in, into the conciousness of today.

So to Carrie’s four children, a month without their mother in Canada, I say thanks for lending your mother to us, and for allowing this experience to show our four children just what a skill they possess; and to Carrie, thank you for coming to Rouen and sharing your book with us,

..and to everyone else, read this book -it promises to be good,

“Invisible sous la Lumière” – for us, we are, after all in France! 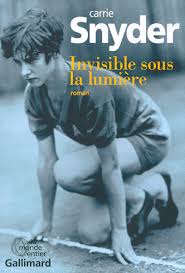