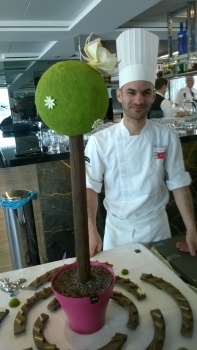 Spread the sugar onto a silicone mat. Caramelize in the oven at 180°c. Leave to cool. Once cold, finely grind to the desired consistancy.

Combine the gold powder with the 90% alcohol. Spray the inside of the mould with a purlveriser pistol. Let the alcohol evaporate to leave a gold residue.

Sprinkle a small quantity of caramelized sugar into the hollows of the mould to give the sweet some “crunch”. Using a piping bag fill the chocolate lined mould hollows with vanilla ganache, ensuring that the ganache level rests just below the level of the chocolate “shell”. Allow to crystalize in the fridge, ideally over several hours or overnight.

When cool and crystalized, enrobe with mould with a layer of molten chocolate to seal the ganache in the centres of the “chocolates”. Scrape the excess chocolate from the mould before it hardens and leave the chocolates to cool.

After several hours, or overnight, flex or tap gently the mould to release the chocolates.