This morning it wasn’t just a suitcase sitting silently by the door, It was also my very disappointed nine year old.

It was 7am, and having blasted about town jacketless in the ‘almost-sunshine’ over the weekend buying the last remaining items for ‘Classe de Mer’, we were not prepared for this morning’s revelation.  A suprise ‘chute de temperature’ at 6am had brought with it snow that had been entirely absent at 5am.

So it was that some 40 mothers were consoling their children that they would not be parting for the seaside at 8am that morning nor missing school for a week. They have every reason to be disappointed. We live but 2 hours from the wonderful sandy beaches that played such an enormous role in the D-day landings. The coach had been hired to take them to Bayeaux and the famous tapestry of William I of Normandy conquering Harold II at the Battle of Hastings, before depositing them at Asnelles sur Mer at a smart hostel.

This coastal region about Bayeaux rich in history. Arromanches, a small market town on the beach hosts an excellent War museum,

and a short walk along the cliff path passes the 360° cinema,( showing both beautiful, yet harrowing footage of the area before, during and after the war) before arriving at the headland viewing area.

If this is not enough, the Bény sur Mer Canadian cemetery is only a ten minute drive away along with Omaha Beach and its spectacular rugged scenary and glorious sand. It is difficult to imagine the events that took place in  June 1944 when the sun is shining, kites flying and ‘Char-a-Voile’ are skidding across the sands. Nevertheless reflect one must! 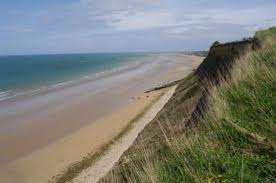 Just as in 1944, buckets and spades lay discarded, only our children were listless and resigned where the children of yesterday would have been fearful. For once they were cursing the snow and looking at it with misery. 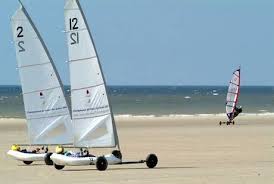 And the sky turned white again and the blizzard continued.